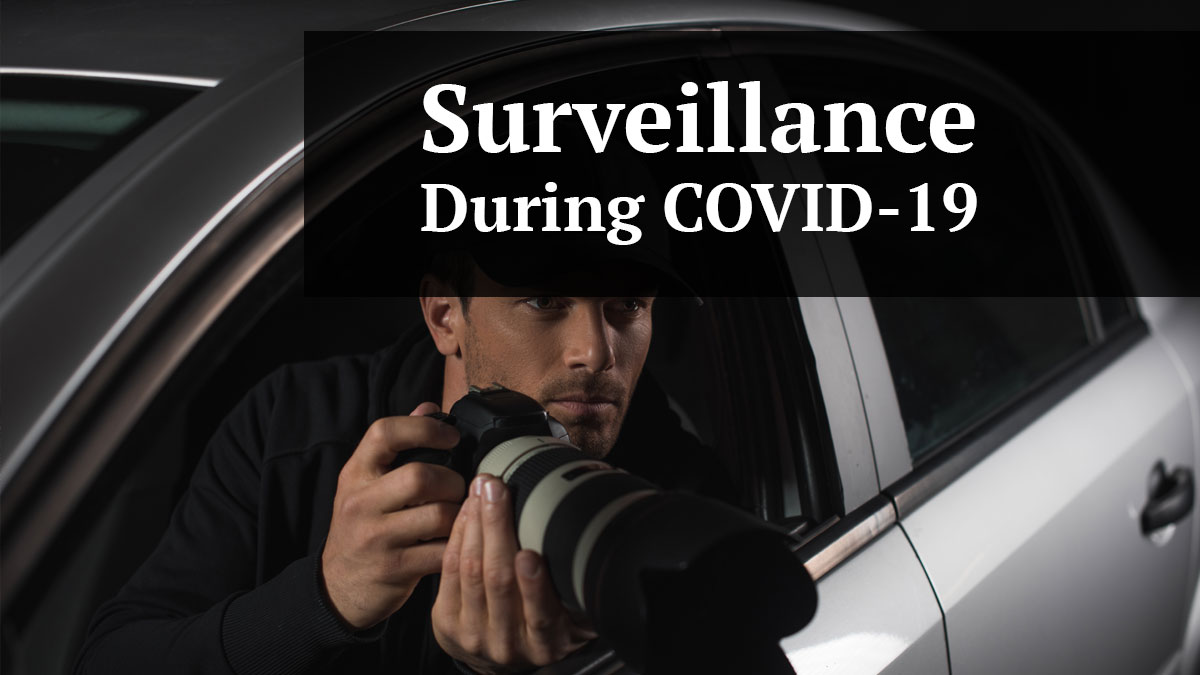 During these uncertain times you would think that the insurance companies would also be taking a pause. But, it has come to my attention that they are using this pandemic as an opportunity to hire private investigators to conduct surveillance on individuals who have pending personal injury claims.

It seems that due to the shortage of work during the pandemic, these private investigators are setting up on people’s homes in an effort to catch them in their yards. From what I’ve read and what has been reported to me, it is actually easier for the surveillance to be conducted now because people are a sitting target. Their goal is to film personal injury claimants outside playing with their children, carrying bags or grocery bags, or even doing yard work. Working in one’s yard is becoming a popular habit due to the stay at home orders during the pandemic.

Do Insurance Companies Hire Investigators to Conduct Surveillance in Every Case?

The second category of cases that you can expect surveillance to be conducted is if it is a big case with a serious accident. Because there is so much money on the line with a serious injury case, they are more likely to exhaust all remedies to try and come up with some type of defense.

The last category of cases where you can expect surveillance to be conducted is once a case has been set for trial. That means a lawsuit has been pending for some time and settlement has not been successful. In this scenario, the insurance company will hire someone to watch the claimant in order to come up with favorable evidence to show to the jury.

How Do You Know If You Are Being Surveilled?

Knowing when and where you are being watched is not easy. In fact, I do not even tell my clients about the possibility of surveillance because I fear that they will become paranoid. Almost all of the surveillance video that I’ve seen is shot from a car. That means the investigator is either in the car with a camera or has left the car there with a camera rolling. Yes, they will actually park a car near your house or office with a camera running for a couple of days knowing that you will be outside at some point. If you have a pending personal injury claim and see a strange car stopped near you, the chances are that it has a camera in it.

What Do You Do If You Suspect That You Are Being Watched?

As mentioned in the above, if you see a strange car parked outside of your home or business and are suspicious, I do not recommend that you confront the person. They are entitled to film in public areas without your consent under Florida law. If you chase them off, they will simply be back using another technique. My advice if you think you might be being watched is to simply ignore them, but do not give them any footage that could hurt your case. That means you cannot carry bags or do anything involving bending or lifting. My best advice is to use common sense about how they will want to use the footage. And, having to explain what you were doing is not the position that you want to be in. Just don’t give them anything that can hurt your case.

How Is Surveillance Used?

You would be surprised at the lengths that investigators will go to get surveillance video that will help the insurance company. Keep in mind that the investigator will not continue to get hired unless he or she is able to deliver something harmful to your personal injury case. Therefore, these investigators will spin whatever they can obtain against you. For example, they may take 30 hours of surveillance but only have you carrying grocery bags for 1 minute. They will destroy the remaining footage and only turn in the minute of harmful video. You will never be able to know how long they actually filmed and got nothing. Now, your lawyer may be able to cross examine the investigator about this, but again, you don’t want to be in the position to explain your actions during a trial. Regardless of how much video they took to find something, if it is harmful, it could really hurt your case. They say a picture is worth a thousand words and video is extremely powerful.

At St. Petersburg Personal Injury Attorneys McQuaid & Douglas, we have handled countless claims that have involved surveillance. In most situations, we are able to minimize the impact that it has. But, when you are asking for insurance companies to pay money to resolve claims, you must be prepared for anything that they throw at you, even during this Covid-19 pandemic. If you have any questions about your personal injury claim, we are happy to answer them. Our consultations are always free. Please stay safe and good luck with your personal injury case.