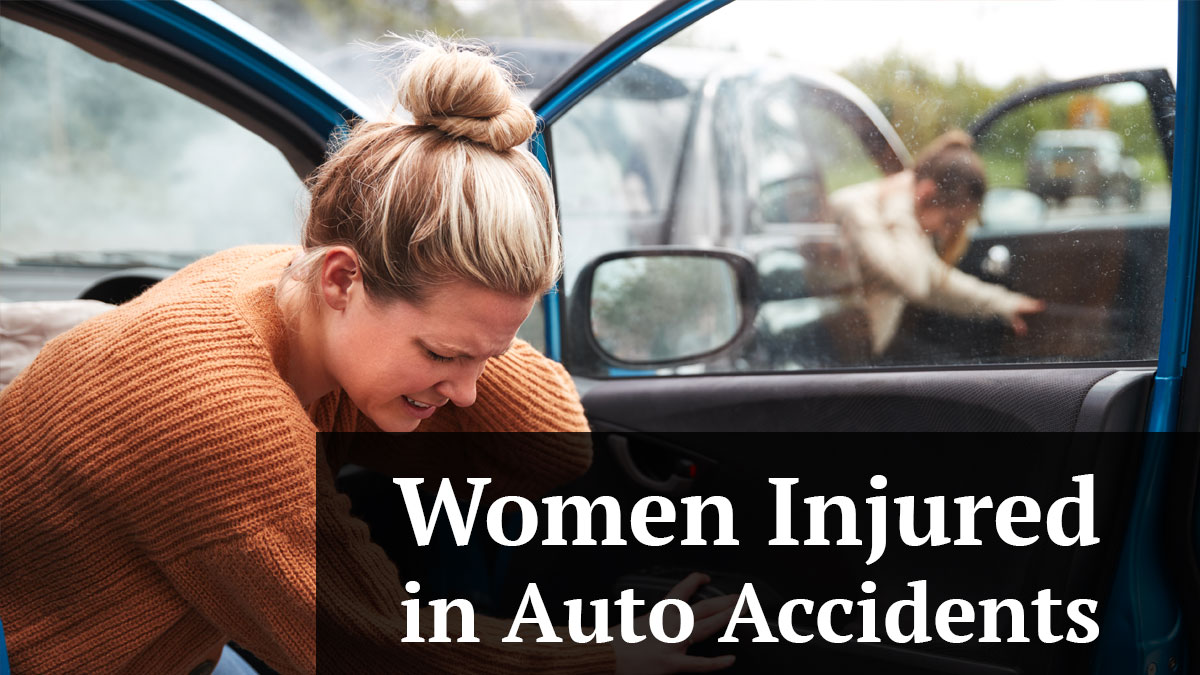 At St. Petersburg Personal Injury Attorneys McQuaid & Douglas, two-thirds of all our auto accident clients are women. I noticed this trend and started to ask myself why. I wondered whether women were simply more in tune with their bodies and more proactive about getting treatment. I wondered if men were just more likely to live with the pain. But, the severity of the injuries to my female clients and the amount of surgeries that they undergo compared to my male clients belied my assumptions.

Then I came across a study from the Center for Applied Biomechanics (CAB) at the University of Virginia (UVA). The CAB is the largest university-based injury biomechanics lab in the world. It is an engineering lab that specializes in impact biomechanics for injury prevention. The study confirmed what I was seeing at my personal injury law firm: that women are much more likely to be injured in auto accidents than men. The results are truly eye opening.

The Study From the University of Virginia:

On July 8, 2019, the CAB at UVA published the results of its study, titled “Automobile injury trends in the contemporary fleet: Belted Occupants in frontal collisions.” The study analyzed data from 22,854 frontal auto crashes that occurred from 1998-2015. In these crashes, 31,254 occupants of the automobiles were either drivers or passengers. The occupants were almost equally divided among male and female. Of the occupants of the vehicles, 18,441 people were injured. The data detailed which parts of the body were affected and concluded that each injured person sustained an average of 3.8 injuries.

Although the gender of the injured parties was a factor, it was not the sole one for purposes of the study. However, the conclusions based on the disparity of injuries between men and women were the most intriguing and most newsworthy. The study concluded that women were 142% more likely to sustain an injury that was moderate or worse and 73% more likely to sustain an injury that was serious or worse! These differences are significant and noteworthy. The study ranked the severity of the injury pursuant to the Abbreviated Injury Scale (AIS), so I was unable to tell how much worse the injuries actually were. However, because the study listed the injuries as moderate or worse and serious or worse, it must be assumed that they included severe, critical and untreatable injuries (death) into their findings.

Regardless, the disparity between the frequency of injuries to men and women require a closer look. Fortunately, the study also made some findings as to what specific body parts affected women in disparate numbers. The biggest disparity occurred to the lower extremities. This encompasses the knee, thigh, hip, leg and ankle. For these lower extremities, women were 205% more likely to be injured. Women’s brains are also more susceptible to injury according to the study. Women are 76% more likely to have a moderate brain injury and 44% more likely to have a severe brain injury. Spinal injuries to the neck were also disparate. Women were 99% more likely to have injuries to their cervical spine than men. Unfortunately, the study did not obtain data on the lumbar spine, which would have revealed disparity in back injuries, a point that I am very curious about. Needless to say, this study is truly eye opening and something that I will be cognizant of in my future auto accident injury cases.

Swedish Study on Neck and Head Injuries to Women:

The data confirming the disparate injuries to women’s heads and necks was also confirmed in a Swedish study. According to the study of people treated for injuries at hospital emergency rooms in two Swedish cities, women more often sustained head and neck injuries in pedestrian accidents and as car passengers in rear-end collisions and side collisions. It found that the incidence of minor and moderate head and neck injuries was higher among women than men. These results confirm what I observe in my car accident injury law practice and the UVA study.

Why Are Women Injured More Often in Auto Accidents?

Now that the data from the UVA and Swedish studies confirms my suspicions about the greater incidence of women being injured in auto accidents, what are the causes? While no one has a definitive answer, the authors of an article published on October 23, 2019 in Consumer Reports have a theory. In “The Crash Test Bias: How Male-Focused Testing Puts Female Drivers at Risk,” the authors discuss the fundamental problems with the design of automobiles based on results of crash test dummies that do not accurately reflect the size and shape of women. These crash tests are regulated by the National Highway Traffic Safety Administration with the Insurance Institute for Highway Safety. All vehicles sold in the United States are subject to these safety testing regulations. In these crash tests, a “50th percentile male” dummy is used. These percentiles were based on the average heights and weights from the 1970s with the male dummy height of 5’9” and weight of 171 pounds. However, current health statistics indicate that the average male weighs more now. A “50th percentile female” dummy is also used with a height of 4’11” and weighing 108 pounds. The female dummy has no structural differences compared to the male dummy. It is just a smaller version. Critics of the use of this female dummy point out that today’s average female is 5.4 inches shorter and 27 pounds lighter than the average male. As a result, women may sit closer to the steering wheel, with their seats raised, and wear their seatbelts differently. Most importantly, because the dummies are identical in shape, they do not take into account the differences in the female pelvis or thicker male neck. As a result, the crash testing being performed all across this country is skewed toward the safety of men, not women!

Should Women Receive Different Medical Treatment for Their Injuries Than Men?

I was curious about this question because I wondered if we were missing anything or overlooking something in our medical treatment of women. Interestingly, I could not find any information about whether there are medical treatments for auto accident injuries that are specific for females. I also spoke to several local doctors who confirmed that they do not perform their treatment based on gender, but on the injury itself. This leads me to another question. Should medical treatment be more geared toward gender? I believe that as our medical profession continues to advance, this will be an area of focus and development. But, as of the date of this article, gender specific medical treatments are not generally accepted.

As mentioned above, because we have so many female clients, my auto accident injury practice has been guided to cater to women’s needs. The personal injury world is dominated by male attorneys who not only may not be the best at keeping their clients informed but may be quick to judge. I have made it my goal to be cognizant of the needs of my clients and always put their best interests ahead of my own.

If you have been injured in an auto accident, I hope that this article was insightful. Should you have any questions or wish to discuss a potential claim, please contact me for a free consultation.