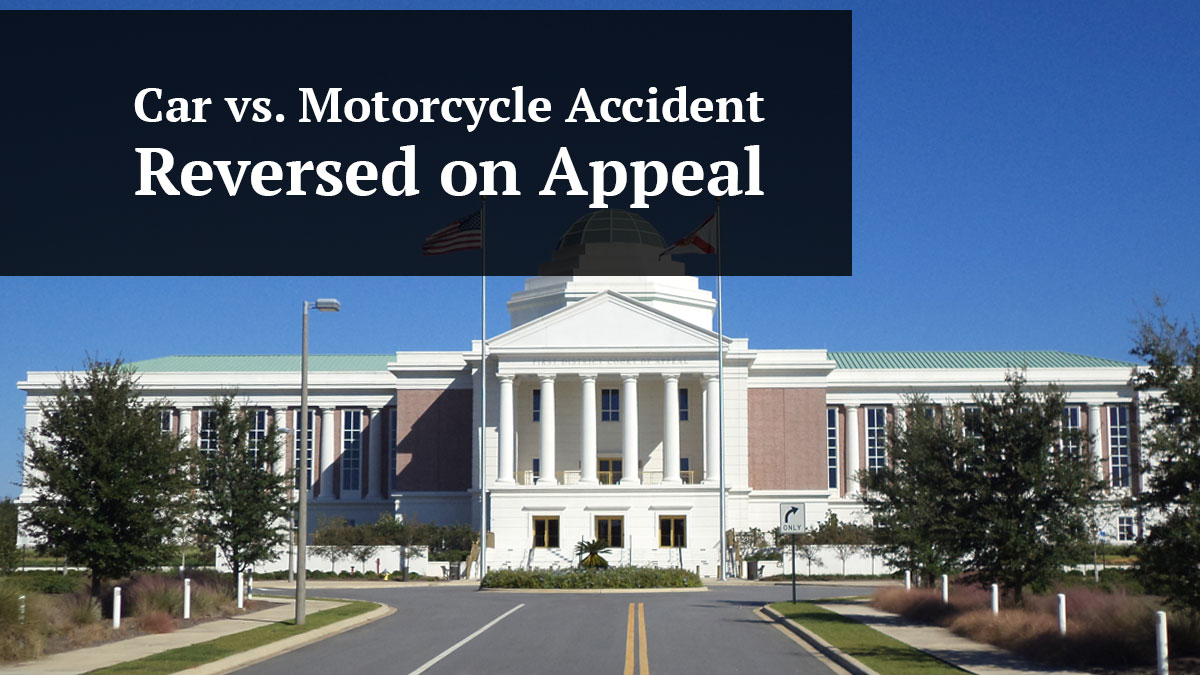 In a new case from Hillsborough County, the Second District Court of Appeal reversed Hillsborough Circuit Judge Paul Huey’s decision to grant a new trial. This overreaching by the appellate court resulted in a miscarriage of justice and is an example of the risks of personal injury lawsuits. In this case, it was undisputed that a car pulled into the lane of a motorcycle. The motorcyclist was seriously injured. Despite abundant evidence of the fault of the car, the jury found that the driver of the car was not negligent. Judge Huey properly ordered a new trial based on the fact that it was so obvious that the car was at fault. But, the Second District Court of Appeal, also sitting in Tampa, decided to reverse Judge Huey and reinstate the verdict in favor of the car. This article will address what happened in the case and the legal basis for the appellate court’s decision.

As St. Petersburg Personal Injury Attorneys McQuaid & Douglas, we specialize in both car accidents and motorcycle accidents. We closely follow all the case results in personal injury law, especially when they are close to home. The Second District Court of Appeal is the appellate court that controls almost all of our local auto accident cases. As a result, this opinion will have a big impact on how cases are handled in the Tampa Bay area. However, the biggest concern is that Judge Huey will be hesitant to make bold decisions after he was reversed for doing what he thought was the right thing to do. He is a fair and reputable judge and any chilling effect on his decisions would be troubling for everyone.

The case went to trial before a jury. At trial, the two men testified. Mr. Saraiva testified that the car unexpectedly moved into his lane and caused the collision. Mr. Valenty stated that he looked multiple times before he changed lanes and used his turn signal, but never saw the motorcycle. He reasoned that the motorcycle must have tried to speed around another slower car and then got back into the lane before the impact.

An accident reconstruction expert hired by Mr. Saraiva also testified at trial. He testified that Mr. Valenty caused the accident, but did not say that he was negligent. He stated that because it was dark, Mr. Valenty might have confused the single light of the motorcycle for a car. However, he stated that it was highly unlikely that Mr. Saraiva passed a slower car and then got back into the lane before the impact. He based his opinion on the amount of time that it would have taken to accomplish that maneuver as well as the position that the motorcycle fell after the impact.

The case went to the jury. The jury was asked to determine whether there was negligence on behalf of Mr. Valenty that was the cause of the damages. The jury answered the question in the negative, thus resolving the case in favor of the car that had pulled into the lane and caused the accident!

Mr. Saraiva filed a motion for a new trial arguing that the defense lawyer made improper comments during the closing argument and that Judge Huey should have directed a verdict in favor of the plaintiff on the issue of causation. At the hearing, Judge Huey granted a new trial on the grounds that the verdict was against the manifest weight of the evidence. He was clearly bothered by the verdict and stated that it never entered his mind that the jury could have found in favor of Mr. Valenty. He went on to state that it was one of the most surprising verdicts he had ever seen.

Mr. Valenty filed the appeal to the Second District Court of Appeal asking the appellate court to reinstate the defense verdict.

The appellate court stated that the trial court’s role is to assess the totality of the evidence and only intervene when the evidence is manifestly weighted to the movant’s side. Despite the fact that is exactly what Judge Huey did, it seems that the appellate court got hung up on his statement that it was undisputed that Mr. Valenty was liable for the motorcycle accident. It focused much of the appeal discussing that there was a dispute by Mr. Valenty about whether he was liable. While that was technically true, the appellate court completely missed the point that Mr. Valenty admitted that he sped up, moved into the lane, and caused the accident. But, ultimately, the appellate court found that Judge Huey abused his discretion when he ordered a new trial. It stated that the jury could have relied on many reasons why Mr. Valenty was not at fault. Therefore, it reinstated the verdict in favor of Mr. Valenty.

While I completely disagree with the hyper-technical reasoning by the Second District Court of Appeal, crazy things can happen in the courtroom. Judge Huey was in the courtroom and could hear and see the witnesses in a much different way than an appellate judge who is simply reading a brief or a transcript. The motorcyclist in this case was clearly injured because a car did not see him and pulled into his lane. What type of message does this case send to the public about being careful around motorcycles?

At St. Petersburg Personal Injury Attorneys McQuaid & Douglas, we fight for victims of motorcycle accidents. This case provides a lesson about how difficult it is to prove liability in any type of accident. While we hope that you are not involved in a motorcycle accident, if you have been injured and would like to discuss your options, our consultations are always free.