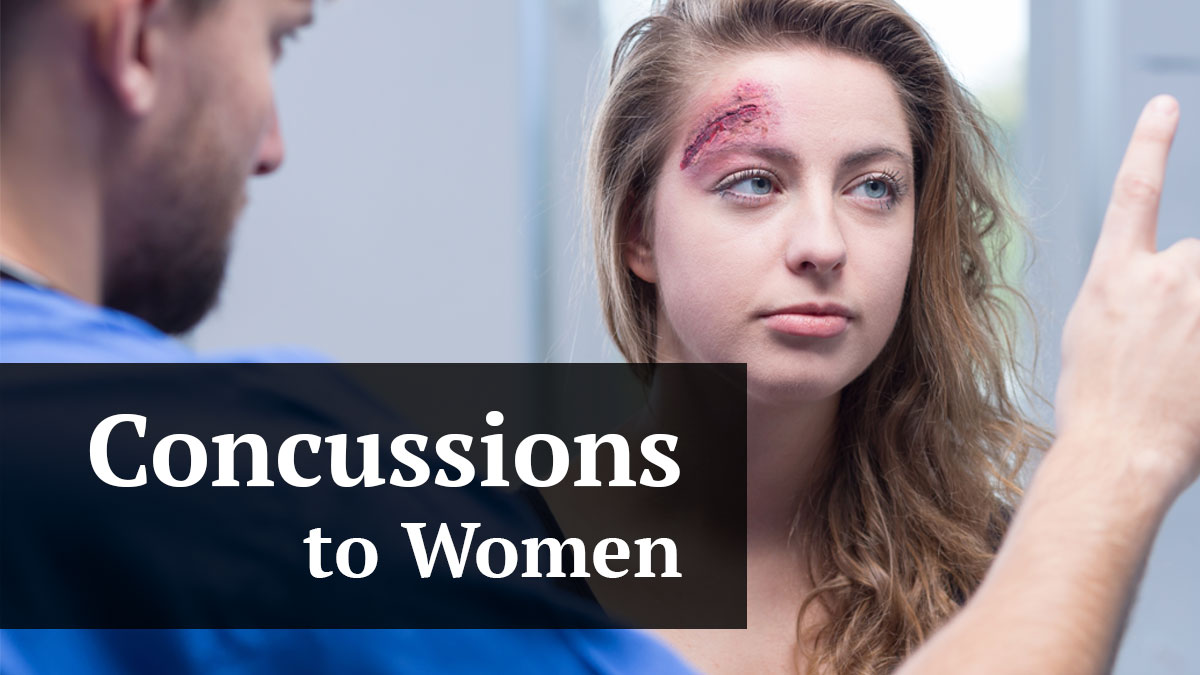 If you have been in a serious car accident and suffered a concussion, you are aware that it is a serious injury. These head injuries are often misunderstood and underappreciated. Male sports, such as football, have received much higher levels of attention in recent years. However, the attention to concussions experienced by women still lags far behind. As the science behind the diagnosis and treatment behind concussions improves, there is hope. And, as attention to concussions moves from the football field to the safety testing and specs of new vehicles, fewer people will experience these injuries.

At St. Petersburg Personal Injury Attorneys McQuaid & Douglas, we specialize in car accident injuries to women. Two thirds of our client base are women, so we have become attuned to their needs. If you have been in a serious car accident and suffered a concussion, this article is written for you. It is part of our continuing series of articles discussing injuries specifically for women.

What Is a Concussion?

A concussion is a mild traumatic brain injury (TBI). It can be caused by any number of situations in a car accident. It can occur simply by the sudden motion of your head being thrown forward and back or side to side. Concussions can be caused by impacts with objects in the car such as the steering wheel, window, airbag, or even the headrest. This sudden movement causes the brain to bounce around or twist in the skull. This motion causes chemical changes to the brain and causes damage to the brain cells. In more serious cases, concussions can cause a loss of consciousness.

What Are the Signs and Symptoms of a Concussion?

Some signs of a concussion occur immediately, like the loss of consciousness. But, the onset really depends on the severity of the impact and the individual person. It may take hours, days, weeks, or in some cases, months to fully recognize that you have suffered a concussion.

Some of the symptoms to look for include the following:

Are Women More Susceptible to Concussions?

Both male and female infants and children have similar rates and symptoms of concussions. But, once puberty hits, females experience a higher incidence of concussions, different and more severe symptoms, and are slower to recover from the injury. Despite the fact that scientists are aware of the increased risk to women for concussions, there has been relatively little research as to why. However, there are theories. One main reason is that female necks are slimmer and less muscular than male ones. The girth of a female neck is about 30% smaller and this increases the acceleration of the head up to as much as 50%. Another theory is the difference in the anatomy of the brain itself. Female brains have slightly faster metabolism rates causing more blood flow to the head. If a head injury disrupts this supply of glucose and oxygen, the damage is greater. The third theory relates to female sex hormones with risk of concussions varying according to hormone levels during the menstrual cycle. Research has shown that during the follicular phase (after menstruation and before ovulation) symptoms were less likely compared to an injury during the luteal phase (after ovulation and before menstruation). Why this disparity occurs during these cycles is still unknown.

What Is Different About Concussions to Women?

Women experience longer and more severe symptoms than men and take longer to recover. A study found that males recovered within 10-14 days days while women had symptoms 3-4 weeks later. And, the women had neurocognitive impairments such as remembering and concentrating much longer than men. It is also thought that women were more likely than men to report the effects of their concussions. Especially for those who play sports, it was found that men cover up the symptoms more often.

What Is the Treatment for a Concussion?

The treatment for concussion depends on the severity of the injury. As mentioned in the above, the treatment options are still developing as research continues. A brain MRI is common in almost all cases to determine the extent of the injury. Fortunately, surgery is rare and likely only necessary if there is bleeding in the brain, swelling of the brain, or another serious injury to the brain. Most concussions do not require any major medical treatment. Unfortunately, time and medication management are the two main forms of treatment. You will be prescribed rest, to avoid physical activities, and not to consume alcohol. In more severe cases, there are brain exercises that can be performed to trigger brain function. These exercises help stimulate the brain into creating new pathways for recovery.

Concussions from car accidents are serious injuries that need to be treated and monitored with care. At St. Petersburg Personal Injury Attorneys McQuaid & Douglas, we regularly work with board certified doctors and neurologists that specialize in the diagnosis and treatment of concussions.

If you are experiencing the symptoms of a concussion after an accident, you are not alone and we can help. Many, if not most, of our female clients report headaches, memory issues and/or cognitive impairment after a serious car accident.

In these situations, after receiving proper medical and medication treatment, we will submit a demand to the insurance company to recover damages for your injury. This demand includes the diagnosis, any MRIs that have been performed, the treatment, the bills, as well as how the concussion has affected your life. Insurance companies are becoming more sensitive to injuries of the brain and are more likely to pay more if your case has been properly handled.

If you have suffered any injury, including a concussion, from a car accident and would like to discuss opening a claim, please contact us for a free consultation.