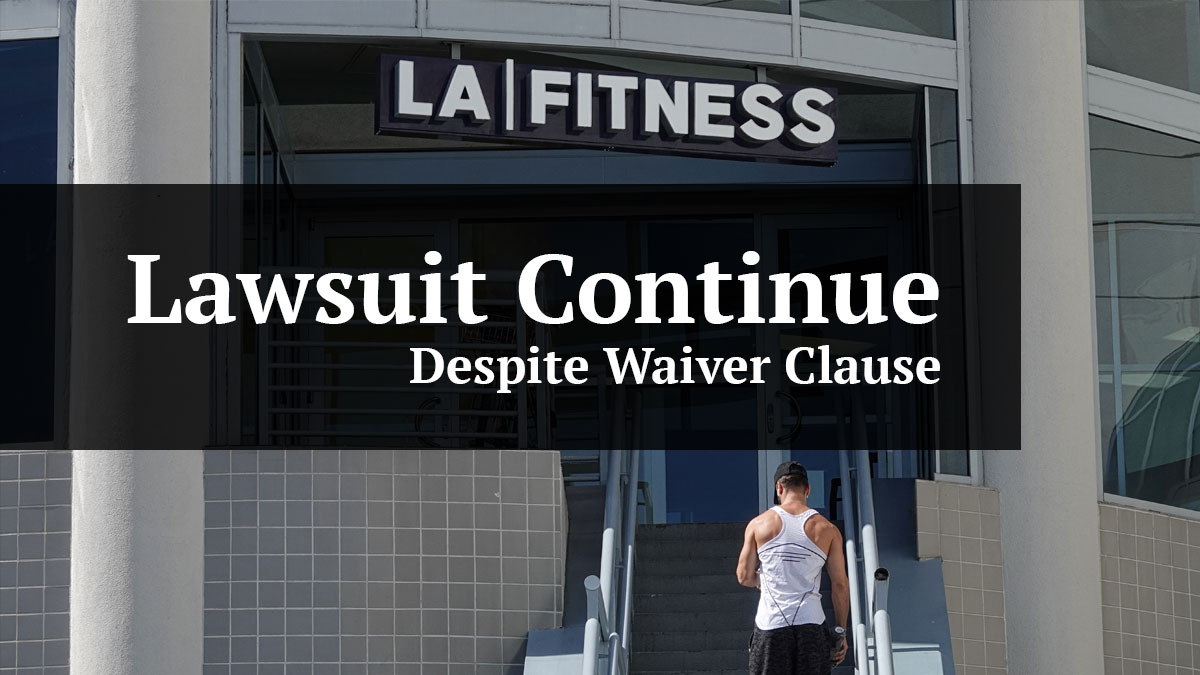 In a decision that reflects the court’s unwillingness to dismiss personal injury cases based on a hidden waiver in a contract, a lawsuit in Florida was permitted to continue against LA Fitness, a well-known gym franchise. This decision should be a signal to all facilities, including gyms, that their own negligence cannot be avoided by simply relying on a contract. Based on this decision, places of business must ensure that their facilities are safe for their members at all times. Ultimately, the people of Florida will be safer based on this case.

At St Petersburg Personal Injury Attorneys McQuaid & Douglas, we represent people who have been injured due to the negligence of others, including the negligence of businesses. When a business creates or leaves a dangerous condition and does not warn you, they may be held liable for the damages you sustain. If you have questions about whether you have an injury claim against a business, please contact us for a free consultation.

Summary of the Case Against LA Fitness:

In Savoia v. Fitness International, LLC, d/b/a LA Fitness, Fla. 4th DCA Case No. 4D19-368 decided on December 18, 2019, Mr. Savoia was a member of LA Fitness when he slipped on water, fell, and was injured in the bathroom. He filed suit against LA Fitness for permitting a dangerous condition to remain without warning him of the danger. LA Fitness denied the personal injury claim alleging that Mr. Savoia had signed a membership contract with the gym when he joined and included in that contract was a clause stating that he waived all claims against the facility. The interesting aspect of this lawsuit was that it dealt very little with personal injury law and instead dealt primarily with contract law. There seemed to be no question that if the contract was valid, the waiver clause would have prevented his ability to sue. Instead, the issue of the case was whether Mr. Savoia was prevented from reading the entirety of the contract before he signed it.

The contract was presented to Mr. Savoia on a computer tablet at a gym. It was three pages long and he was never shown a printed contract. His signature appears on the first page of the contract, but the clause in question that waives all claims against the business appears on the second page. There was no signature on the bottom of the second or third page of the document. Further, Mr. Savoia claimed that most of the language on the contract was obscured by the pop-up space for his signature. Finally, Mr. Savoia claimed that when he asked about the rest of the contract, he was told by the employee that the contract was just about the start date and the payments. Specifically, he alleged there was no mention that part of the contract addressed him being prevented from bringing a claim against LA Fitness.

In the trial court, LA Fitness filed a Motion for Summary Judgment asking the court to essentially dismiss the lawsuit against it. In response, Mr. Savoia filed an affidavit stating that he never saw the exculpatory clause in the contract. He argued that for the court to dismiss his claim, his waiver would have had to have been knowing and unequivocal. He argued that because there were disputed issues of material fact, the judge should not grant LA Fitness’ Motion for Summary Judgment. The trial court agreed with LA Fitness and dismissed the lawsuit. Interestingly, the trial judge discussed in detail about the strength of the clause in the contract, but did not address Mr. Savoia’s arguments about being prevented from reading the contract and being misled by the employee about what it contained.

Mr. Savoia appealed the trial court’s decision to Florida’s Fourth District Court of Appeal claiming that there were disputed issues of fact and the trial judge should have allowed the case to proceed toward trial. Specifically, he stated that there were exceptions to whether a person could be bound by a contract if portions of the contract were concealed or if he was dissuaded from reading it by an employee.

The appellate court reviewed similar contract cases. It found the case of Parham v. East Bay Raceway, 442 So.2d 399 (Fla. 2d DCA 1983), which dealt with a personal injury accident at a raceway. In Parham, prior to entering the raceway, Mr. Parham was advised by an employee that he had to pay $1 for insurance, sign his name for the insurance and get his hand stamped. The form he signed was on a clipboard and only the lower half of the form was visible. The top half of the contract, which contained a waiver clause just like at LA Fitness, was covered by another form that was folded in half. Thus, Mr. Parham did not know, read, or see the exculpatory clause that said that he could not sue or bring a claim against the raceway. He signed the form, entered the raceway and was hit by a car and injured. In Parham, the trial judge dismissed the case by granting summary judgment, just like in Savoia. However, in that case, the appellate court reversed the trial judge by finding that the issue as to whether he was prevented from reading the contract was for the jury to decide.

Therefore, relying on the prior case law, the appellate court in Savoia also reversed the trial judge’s decision. It stated that there were questions of fact that needed to be decided by a jury about whether the presentation of the waiver clause prevented Mr. Savoia from reading it. It also stated that a question remained about whether Mr. Savoia was induced not to read the contract when the employee told him the contract only dealt with payments, amounts and the start date. Thus, the matter was sent back to the trial judge for a trial on these issues.

I believe the importance of this decision is to signal that exculpatory clauses should be reviewed in great detail by the courts. I have thought repeatedly as I was writing this article about why a member of a gym would be prevented from filing due to a slip and fall in a bathroom. Why does a gym get away with leaving water on the floor of a bathroom, but no other business? And, why would a gym put such a clause in a contract? I can understand that a gym may want to be covered if someone gets injured using the equipment, but why would that clause extend to cover anything that it does? The moral of this story is that businesses should make sure that their facilities are safe for their customers, regardless of what is in the contract.

At St. Petersburg Personal Injury Attorneys McQuaid & Douglas, we have handled and litigated countless premises liability and slip and fall cases. While we hope that you are not involved in an accident, if you have been injured at a gym and wish to have us investigate your claim, please contact us for a free consultation.