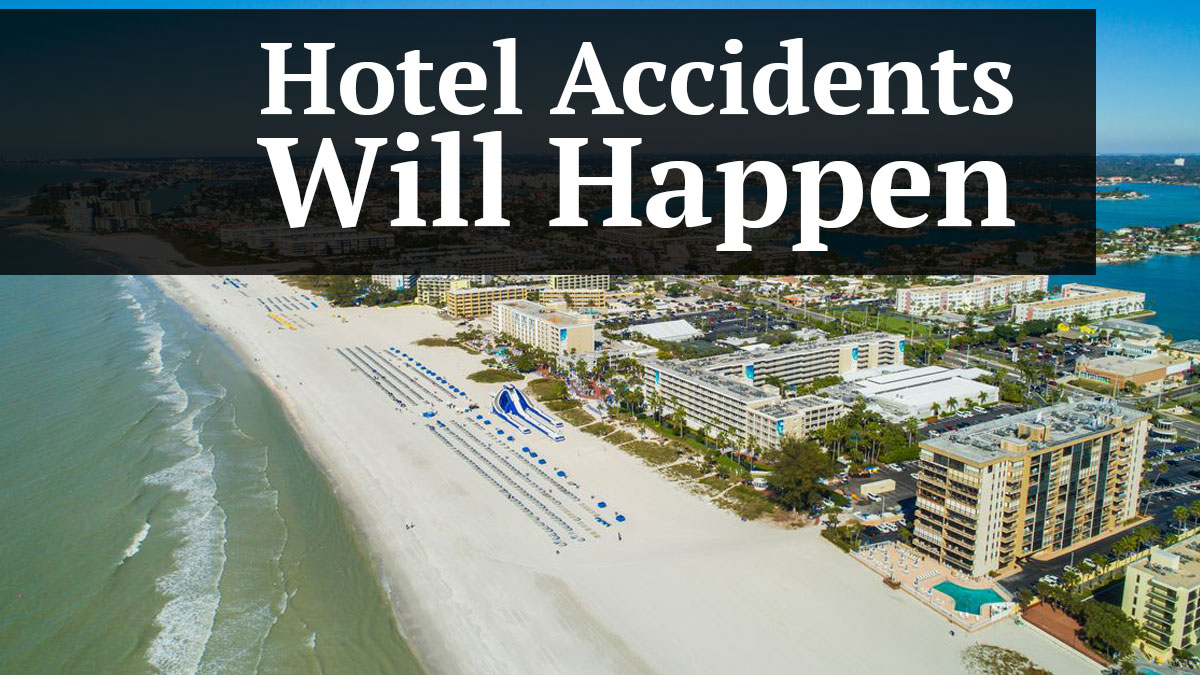 Hotel injury cases are common in Pinellas County due to the number of hotels and visitors we have to our community. In Pinellas County, we have hotels in St. Petersburg, St. Pete Beach, Treasure Island, Madeira Beach, North Redington Beach, Indian Shores, Indian Rocks Beach, Clearwater, and Clearwater Beach. Each of these areas of full of hotels. The more hotels, the better the chance that someone is injured on the premises.

At St. Petersburg Personal Injury Attorneys McQuaid & Douglas, we have represented countless people who have been injured in hotels in Pinellas County. The following article is simply a list of examples of the types of cases that we have handled in the past.

Our client was staying at a hotel on one of the beaches in Pinellas County with his wife for a vacation. The hotel had a complimentary hotel breakfast. The tables for the guests to eat breakfast at all had long table cloths. When our client sat down to eat, a sharp piece of exposed metal that was hidden under the table cloth cut his foot. The foot required multiple stitches. Needless to say, the cut ruined his vacation and he was limited in being able to walk on the foot for a long time. Now, the cut has healed but is sore and there is a large scar remaining. We settled the hotel injury case for over $20,000.

Another example of a hotel injury case we handled occurred on St. Pete Beach. Our client was a guest at the hotel on the beach. The way to the beach was a concrete path. At the end of the concrete, the path transitioned to a series of wooden planks. The planks had not been maintained and at the end, was covered in sand. When our client left the beach to head back to the hotel, he could not see the wooden planks. He tripped on the planks and fell. The fall resulted in serious injuries.

Yet another hotel injury case that we handled also occurred at a hotel on St. Pete Beach. Our client was exiting her room to head to the patio/balcony. As she walked off the patio, there was a hidden drop of 3-4 inches that was not marked. She lost her balance on the uneven part, tripped and fell. The fall broke her ankle. The uneven part was not marked, it was unexpected, and there were no warnings.

Trip and Fall Due to Lighting Issues

Our client was a guest at a beachfront hotel. Her family had plans to grill out and eat dinner together at the hotel. On the path to the grill area, there was a water feature with a little bridge over it. There were no rails or other forms of lighting in the water feature, but there were lights overhead. The client and her family grilled and ate their meal on the picnic tables outside. A rain and lightning storm moved in. During the storm, the hotel lights went out and there were no emergency lights. When our client walked back toward the hotel, it was dark and she could not see the water feature. She fell into the water and broke her leg. She experienced serious injuries as a result of the trip and fall at the hotel.

These are just some of the examples of cases that we have handled at St. Petersburg Personal Injury Attorneys McQuaid & Douglas. Hotel accidents are considered to be premises liability cases. When we are hired to handle a claim against a hotel, we make a claim against the hotel’s insurance company. The insurance company will investigate the claim and then we negotiate it. If we are unable to reach a resolution, we will file a lawsuit. Most of our hotel accident claims are resolved with filing a lawsuit or going to trial. If you have any questions about an accident at a hotel, our consultations are always free.