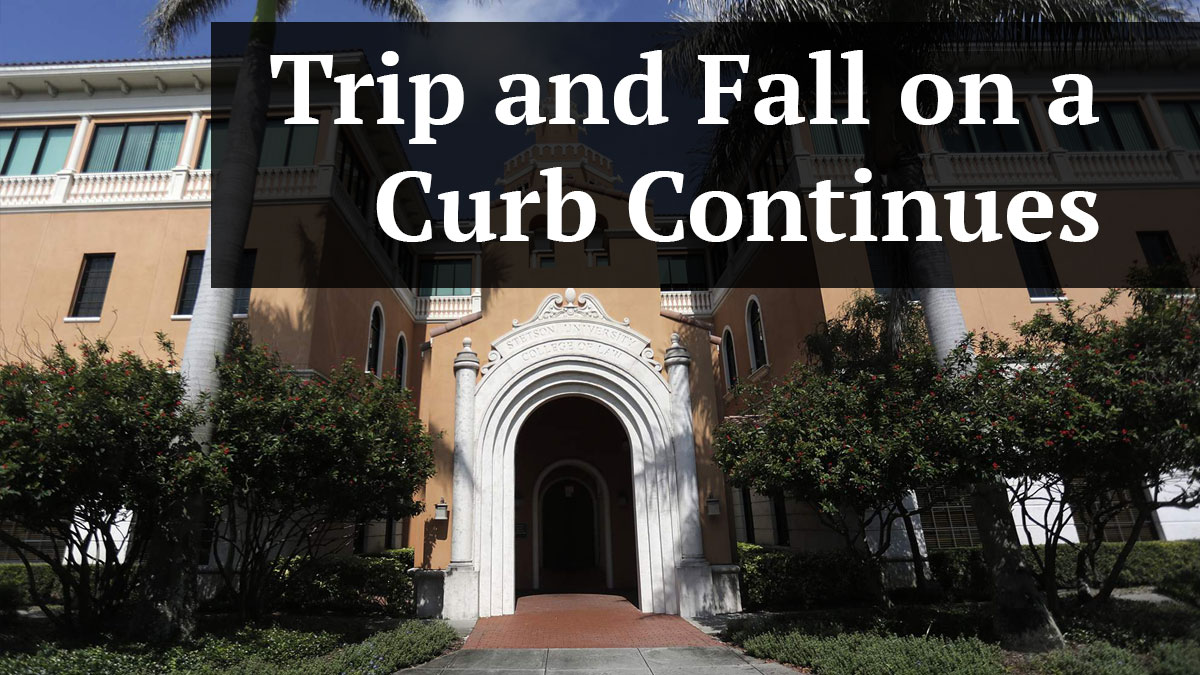 An elderly and disabled man who tripped and fell on a curb on the way to his car was permitted to continue his lawsuit in a recently decided Florida case. In a local decision from Hillsborough County, the Second District Court of Appeal in Tampa reversed the trial court’s decision to dismiss the claim. This article will describe what happened in this case, the law that applied, as well as the impact of the decision on future cases.

At St. Petersburg Personal Injury Attorneys McQuaid & Douglas, we follow recent court decisions that may have an impact on our own clients and their personal injury cases. This case decision involved a trip and fall in a parking lot, which is a common accident throughout the Tampa Bay area and Florida. We have handled and are currently handling countless parking lot accident cases at any given time. We pride ourselves on aggressively pursuing injury claims for our clients in order to recover the appropriate compensation.

Facts of the Trip and Fall Injury Case

In Krueger v. Quest Diagnostics, MPN, LLC, and Bruce Strumpf, 2nd DCA Case No. 2D18-3823 decided on September 12, 2019, Mr. Krueger traveled to a strip mall to visit Quest Diagnostics. MPN was the owner of the strip mall and Strumpf managed the property. Mr. Krueger was elderly and handicapped and actually parked in the closest handicapped spot to the entrance of Quest. Following his appointment, he walked back toward his car and tripped over the curb. The fall caused him serious bodily injuries. After the trip, the scene was inspected and it was determined that there was no cut, dip or break in the curb to allow for handicapped people to enter and/or exit the strip mall. The issue in the case revolved around the issue of liability for the lack of the cut in the curb surrounding the parking lot.

Details of the Lawsuit

Mr. Krueger filed a personal injury lawsuit against Quest, MPN and Strumpf. The claim against Quest was dismissed voluntarily, leaving MPN and Strumpf as defendants. The claim against them was a straight-forward negligence cause of action. The claim alleged that the parking lot was negligently maintained because there was not a cut in the curb that allowed for handicapped people to directly walk from the parking lot to Quest. It was further alleged that this lack of a lowered curb breached the duty of care that was owed to handicapped customers.

Actions in the Case

The lawsuit went to trial on May 7, 2018, in Tampa. Mr. Krueger was prepared to have an expert architect testify that the lack of the cut in the curb was a violation of the Florida Accessibility Code for Building Construction. The expert would have testified that the Accessibility Code dictates a minimal distance between a handicapped parking space and an entrance to the business via the shortest route. In this situation, the route was in violation of this standard. However, the lawyers for MPN and Strumpf objected to this expert testimony and tried to prevent it from going before the jury.

The Decision of the Trial Judge

The Second District Court of Appeal stated that numerous prior courts had permitted juries in premises liability cases to consider whether a violation of building codes was a breach of the duty of care to visitors on the property. See Spadafora v. Carlo, 569 So.2d 1329 (Fla. 2d DCA 1990). It stated that the trial court erred when it created a distinction between building code provisions that address safety versus access. It stated that access is akin to safety and that the determination about whether a duty was owed to Mr. Krueger by MPN and Strumpf should have been up to a jury to decide. It thus reversed the trial court’s decision and sent the case back to the trial judge for another trial.

Lessons Learned From this Case

While not every trip and fall in a parking lot is a viable claim, there are certain instances when consulting with an experienced personal injury lawyer can help. I imagine that Mr. Krueger did not realize that his trip and fall was a viable claim before he spoke to lawyers who were able to discover this violation of Florida’s Accessibility Code. While it is common sense that there should have been a lower entrance for handicapped people near the handicapped parking space, finding this violation of the code could not have been easy. This was an unusual case that may never have happened had the parking lot simply taken minimal safety steps.

If you have been seriously injured in a trip and fall or slip and fall accident, please contact us at St. Petersburg Personal Injury Attorneys McQuaid & Douglas for a free consultation. You may be surprised about what a skilled and experienced lawyer can do to recover compensation for your claim.