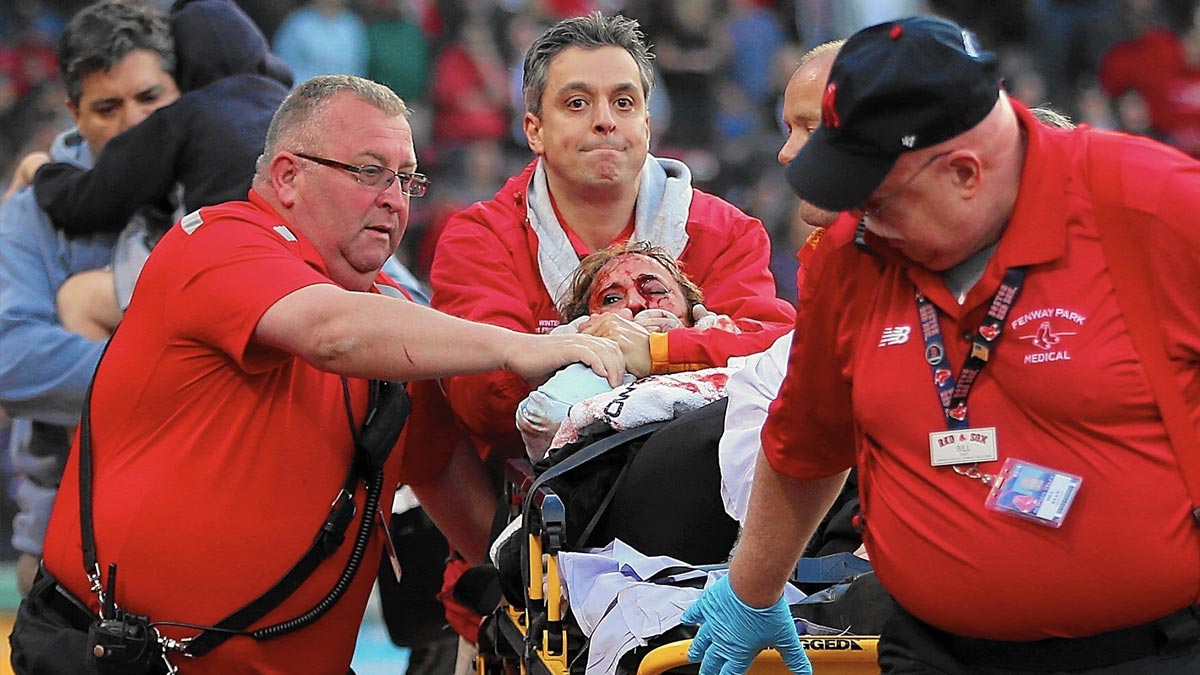 At Yankee Stadium in September 2017, while Todd Frasier was at bat, he ripped a foul line drive down the left field line and into the stands. The baseball, traveling 105 mph, struck a one-year old girl directly in the face causing horrific injuries and a fractured skull. Todd Frasier is seen after the play visibly upset and bent over while the girl was being attended to. This gruesome incident prompted every Major League Baseball stadium to extend the protective netting around the field to protect fans from flying baseballs and other projectiles such as broken bats.

In Florida, due to our population and weather, we have a massive amount of sporting events, both amateur and professional. There are literally countless ways that spectators can be injured at these games. For example, at a baseball game, players misfiring during warm-ups, a batted ball or even a broken shard of a wooden baseball bat can injure a fan. At hockey games, frozen pucks go flying into the stands at high rates of speed and become extremely dangerous. If you are a fan at a professional or minor league game, you could be struck by give away items thrown into the stands or even by a careless mascot. If you are injured in Florida while at a sporting event, the law can provide recovery under certain limited circumstances.

As background, in 1913, the “baseball rule” was created in a Missouri case called Crane v. Kansas City Baseball & Exhibition Co., 153 S.W. 1076 (Mo. Ct. App. 1913). In Crane, a fan was struck and injured by a foul ball and sued the team and its owner. The court found in favor of the team and owner holding that foul balls are part of the game, being struck by a foul ball is a known risk of attending a game and the injured person chose to sit in an unprotected area of the field. This doctrine has now protected professional sports teams throughout the country for over 100 years.

Florida courts have never gone as far as adopting the “baseball rule”, although it appears that there is a tremendous hurdle to establish a claim after being struck by a ball leaving the field of play. There are numerous examples where injured fans have sued, including a case in West Palm Beach against the Braves. In Jackson v. Atlanta Braves, Inc., 227 So.2d 63 (Fla. 4th DCA 1969), while seated behind home plate, a foul ball went over the backstop, struck the plaintiff in the eye and blinded him. He sued the team and the stadium alleging insufficient protective netting. While the court said it was up to a jury whether there were actual issues of negligence and/or assumption of risk, on remand, the plaintiff lost.

The issue of insufficient protection for fans has been a consistently litigated issue. In City of Coral Springs v. Rippe, 743 So.2d 61 (Fla. 4th DCA 1999), the plaintiff was watching her son play a Little League game. She moved from the bleachers to a spot in front of the bench. The fence lowered from 8′ in front of the bleachers to only 4′ in front of the bench where she stood. As she watcher her son, a foul ball struck her in the head and knocked her unconscious. The court found that the City was 40% at fault for her injuries because they should have realized that spectators would stand in that spot and the height of the fence was insufficient to protect from flying baseballs.

The area that courts have determined that teams have the most liability is when they create dangerous conditions, have mascots that are careless, or when they throw give away items into the crowd. A local case was one of the first Florida cases to address these issues. In Woodford v. City of St. Petersburg, 84 So.2d 25 (Fla. 1955), a homeowner was injured when a baseball from Huggins Field, where the Yankees used to have their spring training, landed in his yard. A bunch of kids ran after the ball and in their haste, knocked over Mr. Woodford and he broke his back. He sued the City of St. Petersburg under the theory that the City was aware that kids were chasing after the baseballs and thus created a dangerous condition. The Florida Supreme Court agreed with his position.

Likewise, while not a Florida case, the baseball rule has held to not apply to fans injured by mascots. In Coomer v. Kansas City Royals Baseball Corp., 437 S.W.3d 184 (Mo. 2014), a fan was injured when the mascot threw a hot dog into the stands and hit him in the eye. The court found for the injured fan stating that being injured by a hotdog was not one of the inherent or expected risks of going to a baseball game.

Similar to the Coomer case, in 2013 a Miami Marlins mascot jumped into the stands and pretended to swallow a woman’s head. In doing so, he injured her and she sued. While the case never made its way to a jury, the case settled, so it is clear that the Marlins compensated her and it settled.

Fans and spectators at sporting events will continue to be injured, so the aim of this article is to provide some guidance about the viability of claims. Please pay attention at the ballpark or stadium so that you are not one of the people injured while at a game. If you are the unfortunate victim of an injury at a sporting event, contact a personal injury attorney as soon as possible.