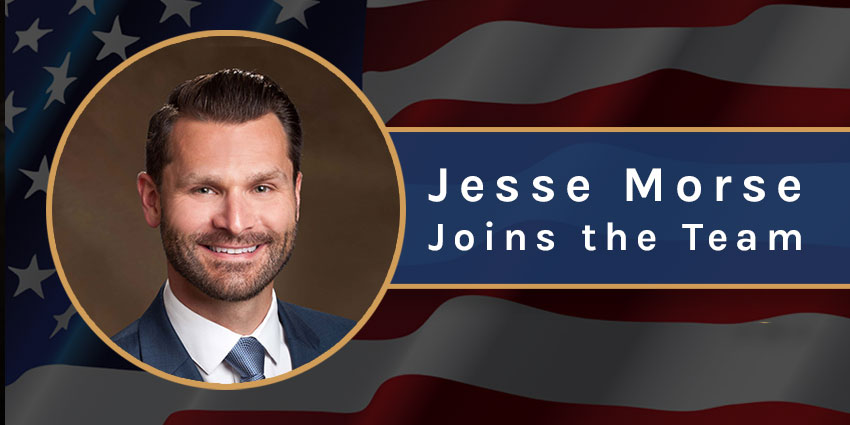 We are excited to announce that Jesse Morse has joined Personal Injury Attorneys McQuaid & Douglas. Jesse’s legal expertise and extensive experience compliment our award-winning and growing team. We welcome Mr. Morse and look forward to working with him.

Jesse Morse is a true American success story and a well-rounded, highly achieved individual. Morse is a multi-skilled attorney and an Air Force Veteran. In addition, he is a former prosecutor and ambitious student, having supported himself through his schooling and education.

Jesse is currently a private attorney and the newest member of Personal Injury Attorneys McQuaid & Douglas. We are honored to have Jesse join the firm where he will employ his talents.

Jesse joined the United States Air Force as an enlisted Intelligence Analyst officer upon finishing high school. He went on to serve in the Air Force for six years. Morse held revered positions while serving in the Air Force. His command in the Air Force involved operating various crewless aerial vehicles, and he also completed four deployment trips in Iraq, Afghanistan, and Africa.

Service has been a prevalent theme in Jesse’s life and career. After earning his Juris Doctor from Stetson University College of Law, he continued to serve his community. Jesse acted as the prosecutor in Pinellas County, Florida. As a prosecutor, Jesse gained vast experience prosecuting crimes related to DUI, BUI, domestic battery, drug possession, and murder.

Jesse does more than serve his country and practice law. Mr. Morse has trained and worked with the Florida Fish and Wildlife Conservation Commission. He played a significant role in contributing to and enforcing boating and wildlife laws in Pinellas County. During that time, he was also able to master his practice as a trial litigator while growing his network in law enforcement agencies and court systems of Pinellas County.

Today, Jesse uses his skills, background, experiences, and connections to help people. Jesse currently represents injured victims against some of the world’s largest insurance companies. In addition, he uses his diverse knowledge and skillset to represent clients, providing legal counsel for criminal and civil cases.

We genuinely appreciate Jesse Morse’s service to our country, community, and firm.