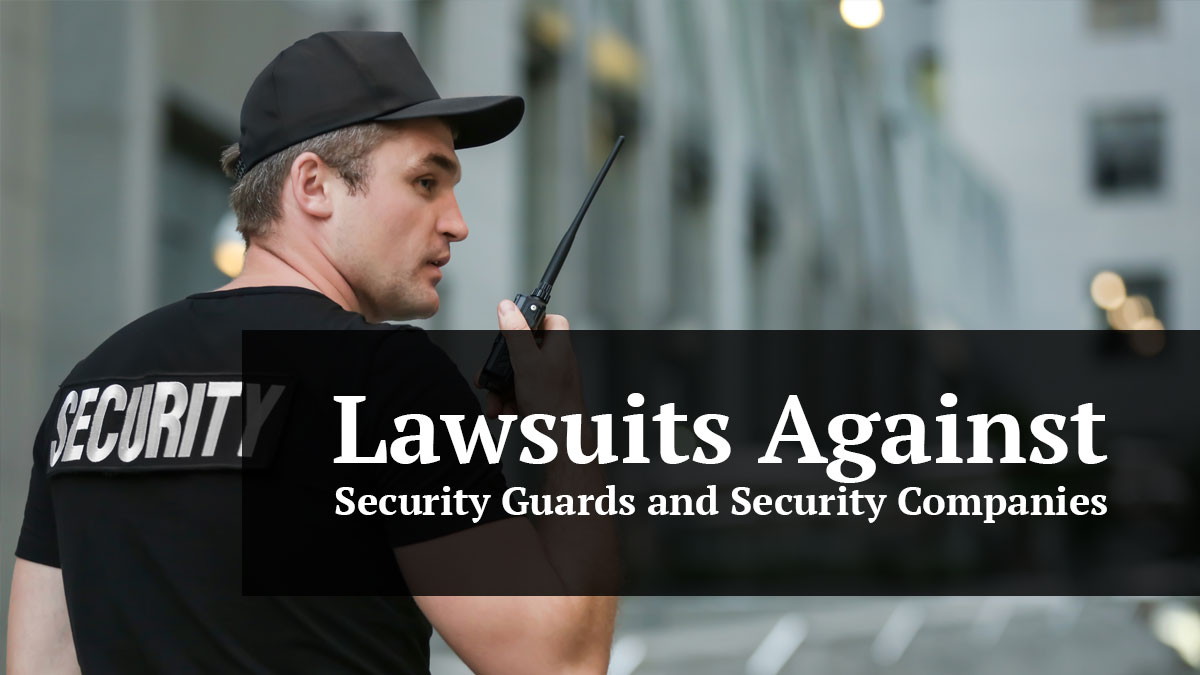 When people are the victims of horrific crimes, the initial reaction is to make sure that the criminal is punished. What many people do not realize is that the criminal justice system can only go so far to make you whole. Although the perpetrator of a crime may be ordered to pay restitution, the odds that a victim actually receives a dollar are quite slim. Especially in Pinellas County, the State Attorney’s Office has a policy of no “cash register justice.” This policy means that even if a defendant in a criminal case offers to pay restitution or a civil settlement, no leniency is given in exchange in the case. Therefore, defendants regularly get sent to prison and their victims are left with nothing except a piece of paper ordering the payment of money.

In these situations when someone has been battered, sexually abused, or even murdered at a place of business, security guards and their security companies can be responsible for these incidents. Claims against a security company are based on negligence. Normal negligence claims allege that the security company breached a duty to keep you safe in some manner. This breach can be as simple as sleeping on the job, failing to properly train or equip a security guard, or negligently hiring someone who was patently unqualified from the start. Whatever the theory of recovery, an experienced personal injury attorney will be able to advise whether you have a viable claim.

At St. Petersburg Personal Injury Attorneys McQuaid & Douglas, we pride ourselves on being aware of the latest case law. In our research, we found a recent case where the court disallowed a case against a security company after a savage attack. The following will describe how the security company was let off the hook by a court in Miami-Dade County.

In Cascante v. 50 State Security Service, Inc., 3rd District Court of Appeal Case No. 3D18-1085, decided on December 26, 2019, the facts are tragic. At approximately 8pm, Ms. Cascante was assaulted by two men in a parking garage owned by Miami-Dade County. There were no security guards present because their shift had ended at 7pm. The two men tried to force her into their car to kidnap her, but were stopped when another car drove by. Ms. Cascante suffered permanent injuries as a result of the attack. The case does not mention whether the criminals were caught or whether the incident was on video.

Ms. Cascante filed a lawsuit against the County and 50 State over the incident for failing to have a security guard present at the time of the incident. The County is not part of this opinion, as it only deals with whether the security company, 50 State, was negligent. It appears from a reading of the case that the owner of the parking garage, the County, is still liable for the negligent security of the garage.

The history of how 50 State got involved with the security services for the garage was detailed in the case. Apparently, the County extended a public bid to provide security services for the garage years earlier. 50 State was the winning bidder and entered into a contract with the County. According to the contract, the County was in sole charge of the number of security guards, their shift schedule, and the level of training required. The County decided that guards should only be present from 7am-7pm. Thus, no security guard was present when Ms. Cascante was attacked.

The case against 50 State claimed that it owed a duty to patrons who used the parking garage and to provide adequate security. The lawsuit further alleged that in the contract with the County, 50 State was supposed to make security recommendations and enact security measures to prevent crime. 50 State countered that within the contract, the County had the sole right to determine the scope of the security measures. Since the County only ordered a guard to be posted from 7am-7pm, it claimed that the County alone was responsible for the security failures. The trial judge agreed and granted a Motion for Summary Judgment in favor of 50 State and dismissed the case. Again, the case made no finding of whether the County was still liable and it can be assumed that the claims against the County are still being pursued or have been settled. Ms. Cascante filed an appeal.

In the appellate court, the Third District Court of Appeal reviewed the law as it pertained to the duties within the contract. It stated that under the terms of the contract, even though 50 State was to recommend crime patterns, future crime trends and data to support planning activities, that was the extent of their obligations. As to the number of officers, the shift schedule and the level of training, that was all the County’s decision. Therefore, the appellate court agreed with the trial court and affirmed the dismissal of the case.

While the above case did not end well for the victim of the attack, it does appear that Ms. Cascante could have recovered some compensation from the County. Unfortunately, there are caps on recoveries against governmental agencies, and I suspect that she was not compensated fully. Because of the caps, it is likely that her lawyers were trying to make an additional claim against the insurance company for 50 State. Whatever the case, it was a sad situation.

However, the case is an example of how the lack of security or the negligence of security companies provides a chance at recovering compensation for those injured or killed. While this case was in a parking garage, we regularly see violent criminal behavior in parking lots. The duty to keep people safe from crime extends to all parking lots.

If you or a loved one was the victim of a crime and you have questions about recovering compensation from a security company or the owner of the property, please contact us for a free consultation.