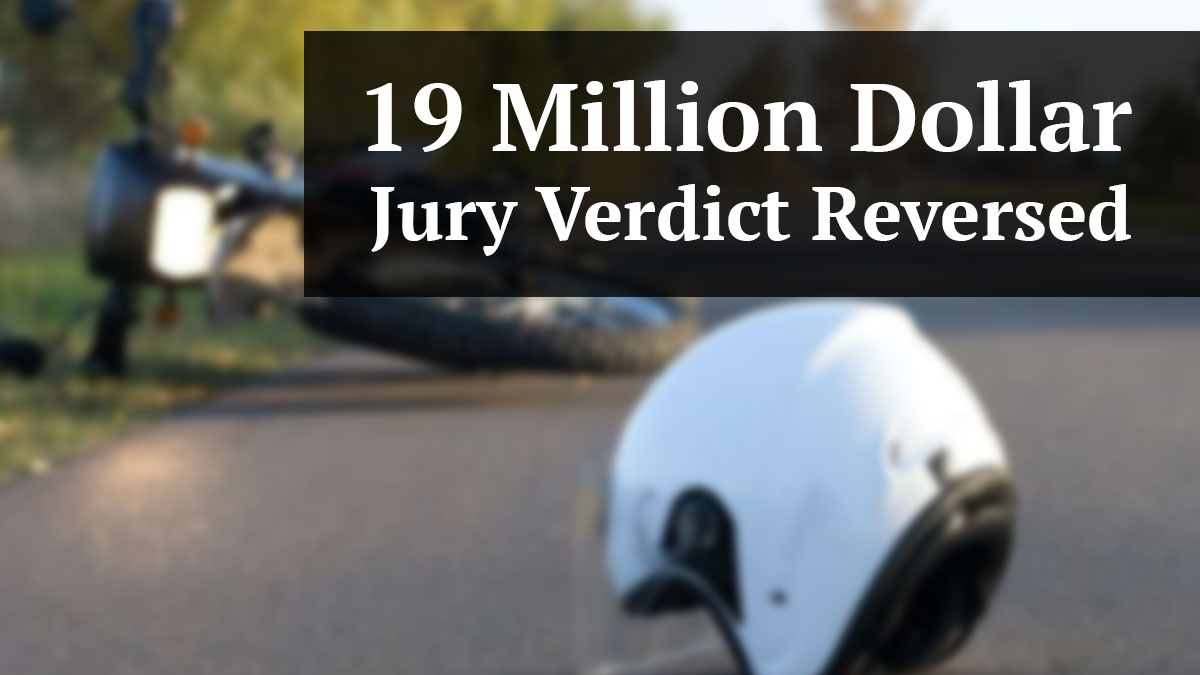 A truly sad and disheartening case from Pasco County was just decided by the Second District Court of Appeal in Tampa. In Lambert v. Emerson, Fla. Second District Court of Appeal Case Nos. 2D18-1872, 2D18-4103, decided on April 1, 2020, Bruce Emerson was so seriously injured in a motorcycle accident on Curley Road that he was made a quadriplegic. Mr. Emerson will require nearly constant care and monitoring for the rest of his life. In short, after trial he obtained a massive verdict against the family whose car injured him in the accident. The appellate court reduced the 19 million dollar verdict against one of the parties on technical legal grounds.

While the case has become unduly complicated from a legal perspective, the accident could have happened to anyone at any time. This article will discuss the case in more detail.

On January 5, 2015, Kyle Emerson (Kyle) was driving a Hyundai Sonata on Curley Road in Pasco. Although he didn’t live with his parents, he had permission from his mother, Mrs. Lambert, to use the car. The car was registered only to his father, Mr. Lambert. The Sonata was his mother’s daily vehicle and it was considered the family vehicle. Mrs. Lambert had permission to drive the car and had authority to allow others, including Kyle, to drive it. Mrs. Lambert was considered to be a bailee of the vehicle, meaning that her husband allowed her to use the car and she was responsible for its operation. (Another common example of a bailee is a car valet. When you turn the keys over to the valet, a bailment is created and the bailee becomes liable for the care of the car).

On the night of the accident, Kyle caused the accident with Bruce Emerson (Mr. Emerson) as he made a left turn. Mr. Emerson was propelled from his motorcycle, suffered serious injuries, and is now a quadriplegic.

Mr. Emerson filed a lawsuit in Pasco County against Kyle for negligence, against Mr. Lambert for being vicariously liable as the owner, and against Mrs. Lambert for vicarious liability as the bailee of the car.

The case went to trial in front of Judge Gregory Groger, a bright and well-respected judge in the Sixth Circuit. The issue in the case revolved around whether Mrs. Lambert could be held liable because she was not the owner of the car. This issue of a bailee involving a family member be vicariously liable was hotly litigated. Mrs. Lambert’s lawyers moved for a directed verdict, meaning they asked Judge Groger to dismiss the case against her. He denied the motion and the case went to the jury. The jury found that the damages were so severe that Kyle and Mrs. Lambert owed 19 million dollars against each of them. Although the verdict resulted in multi-millions against Mr. Lambert, his liability under Florida Statute § 324.021(9)(b)(3), the vicarious liability statute, was reduced by law to $600,000.

Mrs. Lambert appealed the verdict against her of 19 million on the grounds that she should not have been held vicariously liable as a bailee under the dangerous instrumentality doctrine.

The main issue decided by the Second District Court of Appeal was whether Judge Groger should have granted Mrs. Lambert’s request to be dismissed from the case. (called a directed verdict) The theory that found her liable was based upon Florida’s dangerous instrumentality doctrine. This doctrine began in 1920 and sought to provide greater financial responsibility to pay for accidents on the roads. It was based on the theory that a person who originates a danger by entrusting a vehicle to another should be certain that there are enough resources available should an accident occur. In other words, Florida has had a system in place for a hundred years to hold owners accountable financially when the driver of the vehicle injures or kills someone. This is called vicarious liability.

The Second District Court researched the dangerous instrumentality doctrine as it applied to family members like in the case at hand. It stated that the current state of the law was such that if an owner of a car entrusts it to a family member who causes an accident with injury, the owner may be held vicariously liable. But, they found that there was no basis in law to hold both the owner and a family member bailee liable for the bailee’s entrustment of the car. Thus, they stated that the trial judge should have entered a directed verdict in favor of Mrs. Lambert. The effect of this reversal was to nullify the 19 million dollar verdict against Mrs. Lambert.

Effect of the Case:

The Second District Court realized that this decision could have serious implications for Florida law and auto accident cases. Realizing that this issue easily could be decided by the Florida Supreme Court on a subsequent appeal, it certified a question of great public importance:

An overlooked part of this case was pure tragedy to Bruce Emerson. Now a quadriplegic, he lost an opportunity to recover money for what is going to be a very difficult life in the future. Rather than erring on the side of the quadriplegic as Judge Groger did, the appellate court simply made a cold, black and white decision. It absolutely boggles my mind that Mrs. Lambert was the person that drove the Sonata and gave Kyle permission to drive that car that day, but couldn’t be found liable? In any event, it is my hope that for the sake of Mr. Emerson that the Florida Supreme Court accepts the appeal and reverses this decision.

At St. Petersburg Personal Injury Attorneys McQuaid & Douglas, we specialize in auto accidents and motorcycle accidents in the Tampa Bay area. We keep ourselves up to date with the most recent case law decisions and are always available to discuss potential claims. If you or a loved one has been injured in an unfortunate accident, please contact us for a free consultation.