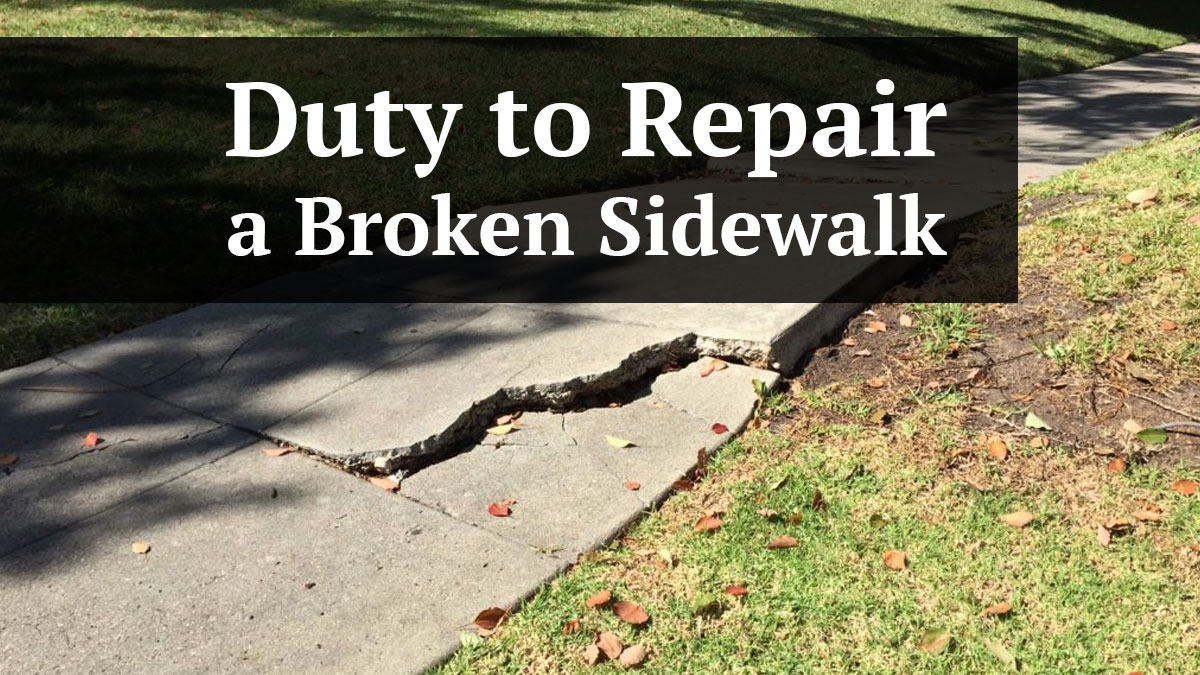 On June 12, 2019, Florida’s 4th District Court of Appeal confirmed that in a trip and fall case, a landlord/owner has a duty to maintain a broken sidewalk even if the sidewalk was known to the resident to be broken and in need of repair. See Leon v. Pena, 44 Fla. L. Weekly D1492a (Fla. 4th DCA 2019). This premises liability case continues to put the burden on landlords and property owners who fail to maintain their property, thus creating a danger to their occupants of a trip and fall accident.

The facts of the case were relatively straightforward. Ms. Leon lived in a condo unit owned by Mr. Pena for ten years. When she moved into the unit, she noticed a crack in the sidewalk on the pathway to her unit. Over the years, the crack got worse. She complained about the sidewalk to Mr. Pena. She claims that Mr. Pena said he would fix it, but never did. Ms. Leon claims she even offered to fix the broken sidewalk herself but was denied. Despite her knowledge of the crack in the sidewalk, she continued to walk along it. Eventually, she tripped over the crack and was injured. She alleged that she did not realize that the crack had deteriorated to the point where the concrete crumbled under her feet and made her fall.

When she made a claim for damages against the insurance company for the owner/landlord, she was denied. She then filed a lawsuit claiming that Mr. Pena had breached his duty to warn her about the danger of the sidewalk crack and failed to maintain the premises in a reasonably safe condition. Mr. Pena and his insurance company defended the case on the grounds that Ms. Leon had knowledge of the condition of the sidewalk, the condition was open and obvious, and that she assumed the risk by continuing to walk on the damaged sidewalk.

Mr. Pena and his lawyers filed a motion to have the case dismissed by the court. This procedure is called a Motion for Summary Judgment. They convinced the trial judge in Broward County to grant their motion. The trial judge concluded that since Ms. Leon knew about the damaged sidewalk and continued to walk on it, she could not bring a lawsuit for when she tripped and fell.

Ms. Leon appealed the case to the 4th District Court of Appeal. The Appellate Court cited numerous cases involving trip and falls on sidewalks in condominiums. It concluded that Mr. Pena did not have a duty to warn Ms. Leon about the cracked sidewalk since she already knew about it. But, just as important, it said that despite the fact that the damaged sidewalk was known and open and obvious, a landlord/owner still has an obligation to maintain its property in a safe condition. Here, Mr. Pena should have anticipated that residents would still use the sidewalk and could possibly be harmed by the condition of it. The court concluded by saying that there still could be comparative negligence by Ms. Leon, but that was an issue to be decided by a jury, not by a judge at the summary judgment stage.

This case is extremely similar to one that I handled. I had a client who rented a condo with a patio. Due to a design or construction defect, the patio pavers all along the rear of the condo unit were somehow undermined by water runoff. The condo management company and the condo owner were both well aware of the problems with the pavers. My client complained to everyone who would listen that there was a problem with the pavers. My client even put the complaints about the patio pavers in writing. My client and the other residents of the complex were promised repeatedly that the pavers would be fixed. Months went on and they were not. My client was not able to use most of her patio as a result of the damage. My client stayed away from the visibly damaged part of the patio. Then, on one unfortunate day, my client was sitting on the patio in an area that was thought to be safe. When my client stood up, the chair caught on a paver that was unknown to be unsafe and my client was severely injured. My client had no idea that the damage to the patio had traveled all throughout the patio.

I was retained and we sent notices to the insurance companies for the owner and the condo management company. The insurance companies sent out private adjusters to inspect the patio and interview my client. They both then denied the claim, forcing me to file suit. Once the lawsuit began, the owner and the condo association tried to pass the blame on the other, it was comical. They both wound up paying a large settlement to my client.

But, the point of this story is that an owner/landlord or even condo management company has a duty to maintain the premises in a safe condition for its residents. The duty should be even more apparent when dealing with condo units where residents are often older and more prone to slip and fall accidents. The Pena v. Leon case verifies this duty. It is absolutely inexcusable for an owner to allow a defective condition to continue. If they do, and someone gets hurt, they should be held accountable. Fortunately, courts across Florida agree and are willing to correct a trial judge when he/she makes a bad decision and sides with an insurance company over a citizen.

If you have been injured in a trip and fall accident and are unsure of your rights, I am available to discuss your situation. My consultations are always free.