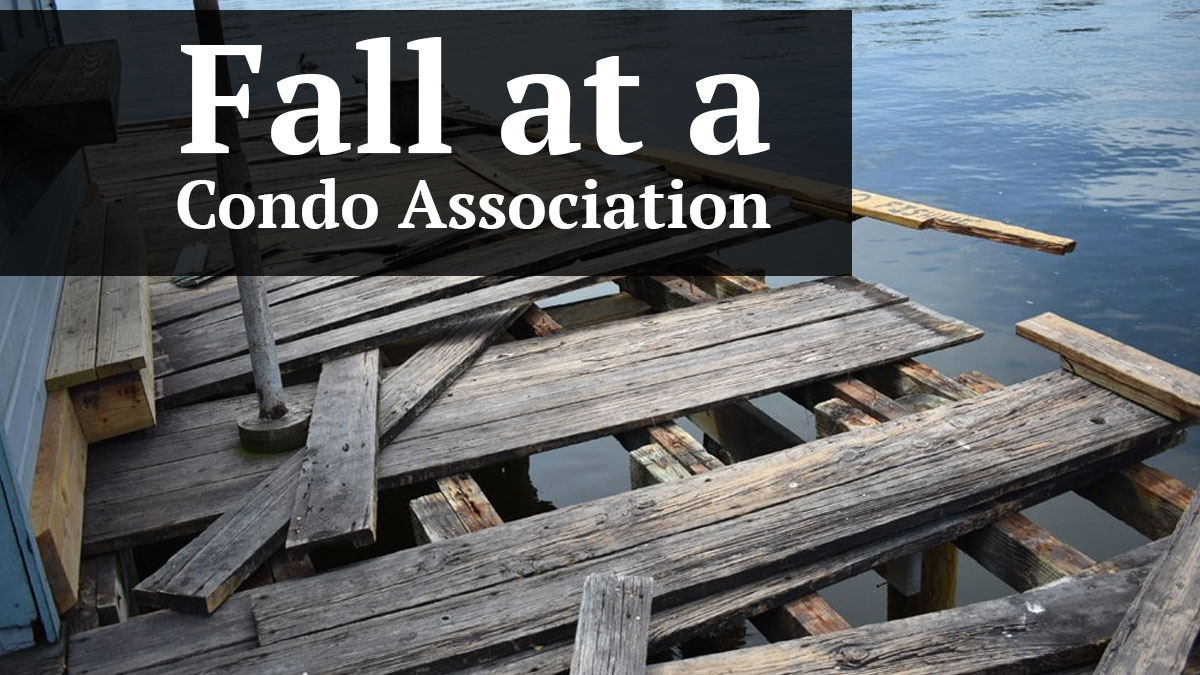 Falls at condo associations are extremely common. The responsibility of condo associations to keep their common areas properly maintained is often neglected due to property management groups or volunteer boards who are stretched too thin. Fortunately, condo associations normally carry insurance to protect them in case of an accident on the property. Historically, most accidents at condos occur on sidewalks or entryways, pools, or in the case I will be discussing herein, near an unfinished dock.

At St. Petersburg Personal Injury Attorneys McQuaid & Douglas, we specialize in pursuing compensation against homeowners and condo associations when our clients have been injured in an unforeseen accident. We have handled countless of these cases in St. Petersburg, Pinellas County and the Tampa Bay area. This article will address a case from Miami where a visitor to a condo association was injured after falling in a hole. We pride ourselves on being up to date with all of the legal trends and apply them to our own cases. If you have any questions about an accident at a condo association or at a homeowners association, please contact us for a free case evaluation.

In Walters v. Beach Club Villas Condominium, Inc., 3rd District Court of Appeal Case No. 3D17-0753 decided on February 26, 2020, Ms. Walters attended a party hosted by the Shachars at Beach Club Condo. Ms. Shachar was a member of the condo board and Mr. Shachar was in construction. At the time of the party, Beach Club’s boat dock was undergoing repairs. The dock behind the Shachar’s condo had been repaired, some of the remaining boat dock was left unfinished due to a dispute over payment between Beach Club and the contractor, Z-Max. Prior to the party, the Shachars removed an orange mesh fence that had been placed parallel to the dock in order to secure the area and restrict people from going there. While walking on the edge of the unfinished portion of the dock, Ms. Walters fell into a hole and was seriously injured.

The claim against the Shachars was settled prior to trial and they were dismissed from the lawsuit. But, the Shachars became a focal point of the whole case.

During the trial it seems that the defendants all tried to pass the blame for the accident. Beach Club blamed the Shachars for removing the fence. It also introduced into evidence a controversial email that was sent to its condo board alleging that the Shachars continued to use the pool and the dock even after it had been shut down by the health department. After the evidence concluded, Z-Max asked the judge to amend the pleadings to add in the Shachars on the verdict form. The judge granted the motion. The jury found Beach Club 15% at fault, Z-Max 25% at fault, Walters 10% at fault, and the Shachars 50% at fault.

After the verdict, Ms Walters asked for the judge to find Z-Max and Beach Club to be joint and severally liable, but that was denied. As a result, Beach Club was awarded its attorneys’ fees against Ms. Walters. Ms. Walters appealed to the 3rd District Court of Appeal.

Ms. Walters presented three arguments on appeal- that the trial court should have determined that Beach Club and Z-Max were jointly and severally liable, that the Shachars should not have appeared on the verdict form, and that the email to the condo association about the Shachars going into the pool and dock area should not have been admitted into evidence.

The first argument was especially important because the percentage of fault attributed to Beach Club determined whether attorney’s fees could be assessed against Ms. Walters. The appellate court relied on Pembroke Lakes Mall Ltd. v. McGruder, 137 So.3d 418 (Fla 4th DCA 2014) to reach its conclusion. In Pembroke Lakes, the mall hired a contractor to maintain the premises. When a guest at the mall was injured, a lawsuit was filed against both the mall and the contractor. Both were found to be at fault and the court stated that because the mall had a nondelegable duty to maintain the premises, the award against the mall and the contractor was joint and several. That meant that the Plaintiff could recover the full amount of the damages against either defendant, regardless of what percentage the jury had assigned at the trial. Using that same reasoning, the Third District Court of Appeal said that Beach Club had a nondelegable duty to maintain the dock. Therefore, regardless of the shared fault by Z-Max, they were both jointly and severally liable. This finding was huge because it appears to have prevented the taxing of Beach Club’s legal fees against Ms. Walters.

The third issue dealt with whether the email from a member of the condo association to the association board complaining about the Shachars and asking to lock the pool should have been admitted into evidence. The appellate court stated that Beach Club improperly introduced this email under the guise that it showed that the pool was left unlocked. It stated that the real reason Beach Club introduced the email was to smear the character of the Shachars. But, the appellate court said that the introduction of the email by the trial judge was harmless error. It concluded that the email did not influence the jury’s decision because of the volume of evidence that showed the Shachars were at fault for contributing to the accident.

Thus, the appellate court affirmed part of the verdict and reversed and remanded back to the trial court the issues related to the joint and several liability between Beach Club and Z-Max.

As you can imagine after reading about the above case, condo accident injury claims can be complicated. They become even more complicated when there are several defendants all trying to blame one another and the plaintiff. It has been our experience that condo associations rarely do the right thing and admit that they have done something wrong. Their most common defense is to blame the injured person for not being careful. These tactics can be frustrating for any plaintiff especially when many of the defense strategies are to simply delay paying.

At St. Petersburg Personal Injury Attorneys McQuaid & Douglas, we have handled all types of cases against condo associations and homeowners associations. We are not afraid of the tactics by the insurance companies and the association boards to intimidate witnesses. If you have been injured in an accident at a condo association, please contact us for a free case evaluation.