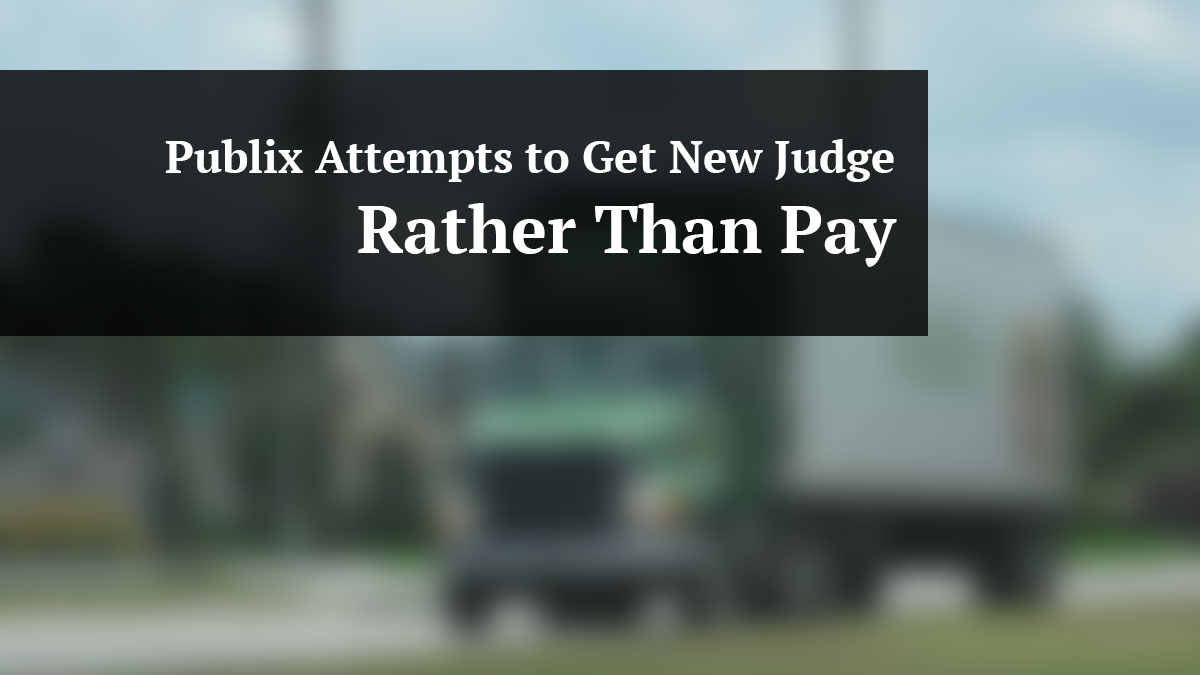 Publix truck driver killed a man. Publix which is the largest supermarket in Florida with thousands of stores across the state. It is generally a responsible store that attempts to compensate its customers when they are injured as a result of their own negligence. Publix’s claim center is located in Lakeland and the adjusters are normally responsive and attempt to settle cases without the necessity of litigation.

But, Publix is self-insured, which means that it pays out of pocket for its losses rather than pay for insurance. This means that Publix has already done an internal analysis that it is less expensive for them to simply pay claims out of pocket than to pay insurance premiums. When a company is self-insured, this always raises questions about their willingness to pay large sums of money to resolve claims.

In a recent case from Broward County, Florida, Publix was sued after one of its trucks killed a man. Rather than pay the claim, Publix has fought the case in court despite, in my opinion, clear liability on its part. After receiving unfavorable rulings, Publix even went after the trial judge rather than accepting responsibility for its own wrongful conduct. This case illustrates the steps that Publix will take to avoid having to pay large sums of money even when it is dead wrong.

In Publix Super Markets, Inc., v. Olivares, 4th District Case. No. 4D19-2202 decided on January 8, 2020, Publix appealed to the 4th District Court of Appeals after its petition to disqualify the trial judge was denied. The facts of the case are truly disturbing and sad. The case is a wrongful death claim following a Publix truck accident. Mr. Olivares was driving his car through an intersection with a green light. A Publix delivery truck, driven by Randolph Sapp, ran the red light at the intersection, crashed into Mr. Olivares’ car and killed him.

The evidence showed that Sapp was driving downhill on a curved road in a residential neighborhood. The speed limit was 40 mph, but one minute before impact, he was driving 51 mph, and at the point of impact in the intersection, he was still going 44 mph. It was determined that Sapp was on his cell phone at the time of the accident. He had been talking on the phone most of the day while driving and was chatting with a friend.

Despite the fact that he was talking hands-free, it was also learned that he had been in 7 or 8 prior accidents. The lawsuit alleged that Publix was negligent in permitting an unsafe driver with a history of accidents to drive one of their trucks while talking on the phone.

During the case, it was further learned that Publix has a policy that permits its truck drivers to talk on the phone as long as it is hands-free.

After conducting discovery, Mr. Olivares filed a motion to permit him to seek punitive damages against Publix. He alleged that Sapp and Publix were grossly negligent because Sapp was speeding, inattentive and distracted by the use of the cell phones. It was further alleged that since Publix permitted this poor driving behavior, it failed to properly train Sapp and/or ratified his conduct.

The major issue in the case revolved around the difference between Publix’s training of its truck drivers compared to its policy. In order to grant the motion for punitive damages, evidence had to be proffered to support this claim. In support of his request for punitive damages, Mr. Olivares pointed out Publix’s training of its truck drivers. It showed manuals and video clips that Publix used to train its drivers to manage speed, look ahead, scan intersections, pay attention and avoid distracted driving.

Publix actually teaches its truck drivers to exhibit a higher level of skill than the driver of a car. Publix’s training also stressed to avoid distractions like cell phones and even plays a warning video of a crash involving a driver on the phone- exactly like the accident that killed Mr. Olivares! As if that was not enough, Sapp admitted that he knew using a cell phone could be deadly.

But, shockingly, he stated that even though he had just killed someone, he would continue to talk on the phone while he drove. In light of all of the training and the warnings about cell phone use, Publix truck driver still permitted to talk on the phone hands-free. Based on all of this evidence and more, Mr. Olivares asked the court to allow him to assert a claim for punitive damages.

The Publix attorneys argued vigorously to prevent the claim for punitive damages. They argued with the trial judge over it. But, ultimately, the trial judge stated that he felt Mr. Olivares had met his burden to be able to ask a jury to award punitive damages against Publix. Rather than accept the ruling and pay the damage claim, Publix moved to disqualify (or remove) the judge. The judge denied that motion and again, rather than accepting the ruling and doing the right thing, Publix appealed.

Publix appealed the case to the Fourth District Court of Appeal. It claimed that based on the judge’s comments during the argument over whether to allow punitive damages, the judge showed that he was biased or prejudices against Publix. The Fourth District Court of Appeal reviewed the record and stated that none of the judge’s comments showed bias or prejudice. It stated that the judge did not disparage the lawyers and gave all sides ample time to argue their positions.

Further, the judge did not rule prior to each side completing their presentations. Thus, the appellate court sent Publix a message to look at its own behavior rather than blaming the judge. The appellate court sent the case back to the trial judge to continue toward trial. It remains to be seen whether Publix will step up to the plate and pay the damages that it caused when its driver killed Mr. Olivares.

At St. Petersburg Personal Injury Attorneys McQuaid & Douglas, we handle all types of truck accident claims, especially against Publix. Since Publix is such a massive company in Florida, its delivery trucks are constantly on our roads. Although these trucks are generally safe, accidents do occur. When the drivers of these trucks are talking on the phone all day long, that makes them dangerous and Publix should be held to account. If you have any questions about a Publix accident or truck accident claim, please contact us for a free consultation.