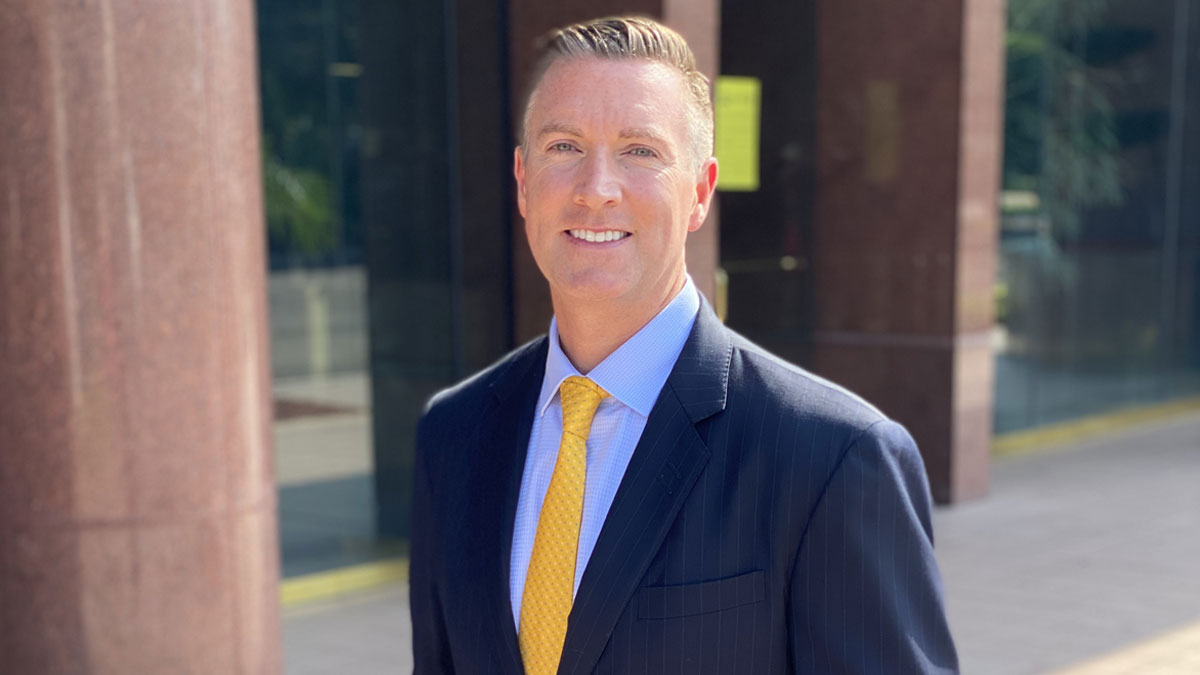 St. Petersburg Personal Injury Attorneys McQuaid & Douglas is proud to announce that on May 27, 2020, Sean McQuaid was sworn in as the 96th President of the St. Petersburg Bar Association. His term in office will last for one year. “While it is an honor to have been elected to this position and receive this individual acknowledgement, my focus will continue to be how to benefit our members and the legal system in St. Petersburg and the surrounding area,” said Mr. McQuaid at his inauguration. He went on to say, “as a profession, we must lead and adapt to the changes in our world in order to maintain the rule of law and service those in need of legal services.”

The ceremony was performed over Zoom-indicative of the current situation and consistent with social distancing directives. Pinellas County Court Judge Edwin Jagger presided over the proceeding from his chambers in downtown St. Petersburg. Also joining in on the call were the Executive Committee, the Executive Director, and approximately 40 past Presidents of the Association. The event was heartfelt and memorable for all who participated. It was the first time in the history of the Bar Association that a swearing in ceremony was performed in such a manner. Mr. McQuaid and Judge Jagger were former law partners, thus the relationship between the two was special. Given these challenging times, Mr. McQuaid will be called upon for leadership, hope, and guidance for the next year.

The St. Petersburg Bar Association was founded in 1925 and is a professional legal organization consisting of over 1,000 members. The membership includes both lawyers and judges. Its stated goal is to serve the legal community, to strengthen the noble calling of the practice of law, and to foster excellence in the profession. The Association has been repeatedly recognized throughout Florida for its service to the legal community. The Association is run by an Executive Committee, paid staff, and multiple section chairs. It is the liaison between the judiciary, the court system, the Florida Bar, and the practicing attorneys in the area. It conducts multiple continuing legal education seminars, networking, and other impressive innovative initiatives. Most recently, the Association’s wellness platform led to national recognition and has been copied across the country.

Sean McQuaid’s election to this position came after many years of service to the Bar. He previously served two terms (four years in total) as a member of the Executive Committee and one year as President-Elect. His platform during these challenging times will be to assist the court and the membership in adapting to the new technologies being utilized in the practice of law. The pandemic has required the legal profession to adapt and Sean McQuaid and the Association are determined to educate, train, and assist the membership through this time.

A secondary goal of Mr. McQuaid’s is to increase the awareness within the organization of referral possibilities among members and to its sponsors. Specialties of practice are often overlooked and attention will be made to educate the members on what types of cases each member handles. This campaign will begin with a 40 member profile series and will continue until all members are featured.

Sean McQuaid Is a Leader in Personal Injury Law in St. Petersburg, FL

Sean is a practicing attorney in St. Petersburg where he is also President of the area’s oldest law firm managing seven lawyers. His specialty is personal injury law where he routinely handles serious injury cases involving auto accidents and wrongful death across Florida. He handles all aspects of each case, from the initial investigation, to the claims process, negotiation, litigation, and trial. Most of his cases are on the West coast of Florida, but he travels depending on the case and the situation. His law practice is extremely successful, but he still makes it a priority to devote time to giving back to the community.

Sean McQuaid is a graduate of Stetson University College of Law in Gulfport, Florida where he graduated in 2000 with dual degrees of Juris Doctor and Masters in Business Administration. During his time at Stetson, he was a member of the Moot Court team. Before attending law school, Mr. McQuaid graduated from Princeton University in 1997 with a Bachelor’s of Arts degree. During his time at Princeton, he was a four year varsity letterman on the baseball team and was team captain his senior year.

Sean McQuaid Gives Back to the Community

Sean has had a long standing dedication to serving the community. He has previously served as a member of the Sixth Judicial Circuit Judicial Nominating Commission, holding that position for nearly five years. During his term, he was tasked with recommending to the Governor of Florida candidates to become judge. Mr. McQuaid also served for five years on the City of St. Petersburg Nuisance Abatement Board, where he held the position of Chairman of the Board for two years. The Nuisance Abatement Board was tasked with taking remedial measure against properties within the City that were accused of facilitating drug and/or prostitution. Mr. McQuaid also served for nine years as the President of his neighborhood Homeowner’s Association in St. Petersburg. He also has dedicated his time to charity. Mr. McQuaid served on the Executive Committee of the Suncoast Chapter of the Make-a-Wish Foundation for three years. During that time, he was responsible for fundraising and organizational leadership in the granting of numerous wishes to terminally ill children in Florida.

St. Petersburg Personal Injury Attorneys McQuaid & Douglas is honored to announce this wonderful achievement and wish Mr. McQuaid, the Bar Association, and the community luck in the upcoming year. There will certainly be continued challenging times ahead, but Mr. McQuaid is well qualified and trained in filling the leadership role.