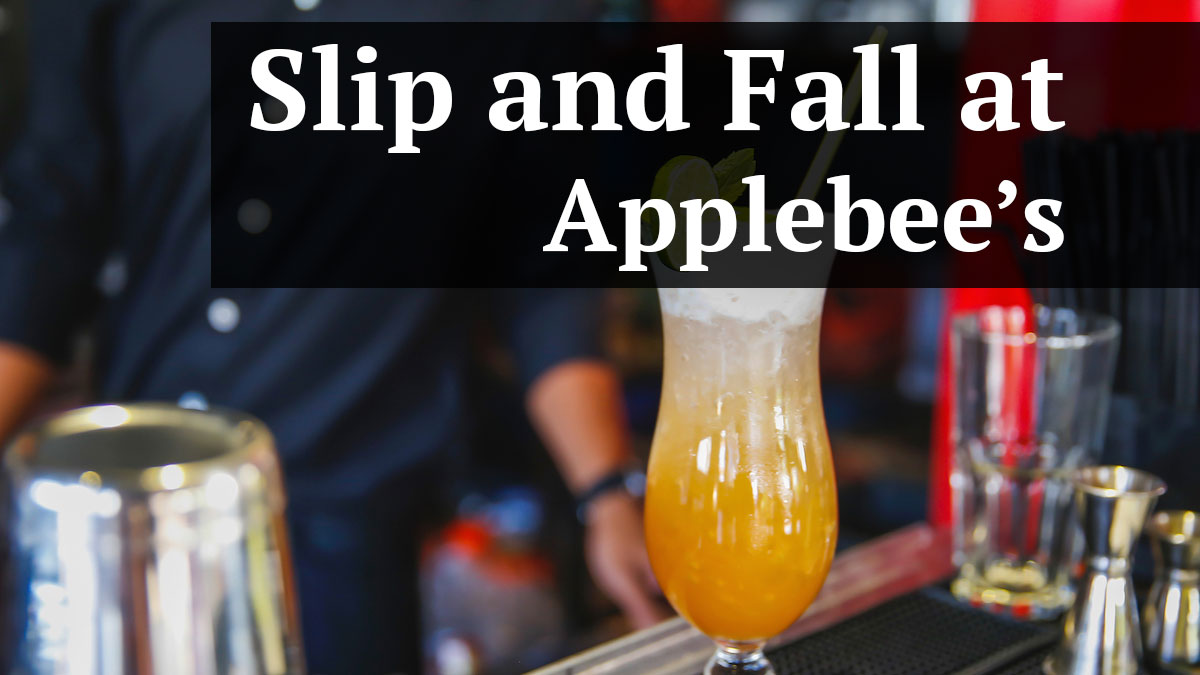 This slip and fall case against Applebee’s demonstrates the extent that businesses and their lawyers will go to avoid paying claims. At St. Petersburg Personal Injury Attorneys McQuaid & Douglas, we routinely get updates on the newest court decisions about Florida’s personal injury law. The common theme in all of the cases is how hard insurance companies fight to deny claims or reduce the amount of money owed to injured people. It is truly amazing how often how businesses and insurance companies fail to do the right thing and compensate someone who was injured simply visiting their property. But, the reality of the situation in Florida is that most personal injury claims result in a fight. Only Florida juries can truly keep big business and insurance companies in check by siding with the consumer.

In Mitchell v. Applebee’s Services, Inc., 1st District Court of Appeal Case No. 1D18-2555 decided on October 1, 2019, a woman named Kelly Mitchell was involved in a slip and fall accident at Applebee’s restaurant in Bay County, Florida. She was injured in the incident but the case did not describe the type or extent of the injuries. We are able to surmise that she was unable to resolve her claim prior to filing suit. Again, those reasons are not addressed in the case. Two days before the four-year statute of limitations ran, her lawyer filed suit. In the complaint, her slip and fall lawyer alleged that two defendants, Apple Two Associates and Applebee’s Services Inc. were responsible for the accident under a legal theory of negligence. Although the lawsuit named both of the defendants, it included only a single count of negligence. The normal procedure for a negligence case against two defendants would have been to file a count of negligence against each of them or two counts. The issue in the case solely relates to the claim against Applebee’s Services. Applebee’s Services answered the lawsuit. It then filed a motion to dismiss the lawsuit alleging that the complaint failed to state a cause of action against it. In response, Ms. Mitchell amended her lawsuit. In the new complaint, she added in a second count against Applebee’s Services alleging that it had purchased the Applebee’s restaurant from Apple Two Associates and assumed liability for the slip and fall accident claim. Applebee’s Services filed another motion to dismiss claiming that this new count was filed well after the statute of limitations had run.

The Decision of the Trial Judge

The trial judge heard the motion to dismiss filed by the insurance defense lawyers. Applebees’ Service based its motion on a violation of Florida Statute 95.11(3)(a), which is the statute that creates a four-year statute of limitations. The trial court agreed with the defense lawyers and said that the new count against Applebee’s Services was filed after the statute had run. Normally, a plaintiff can amend its complaint as long as the new cause of action related back to something that was filed timely. But, the trial judge stated that there was nothing for the new count to relate back to and dismissed the complaint. Ms. Mitchell then filed her appeal.

The First District Court of Appeal outlined the law. It relied on a Florida Supreme Court decision in Caduceus Props., LLC. v. Graney, 137 So.3d 987 (Fla. 2014). It stated that Florida has a judicial policy of freely permitting amendments as long as there isn’t prejudice or disadvantage to the other party. In other words, as long as the initial complaint gave the defendant notice of the general factual scenario, amendments can be allowed. In this case, it stated that amendments are even permitted where the legal theory of recovery changed and even when the amended claims have different elements. It finally stated that the main question when deciding to allow an amendment is whether the other party had notice of the lawsuit within the proper time period.

In this case, Applebee’s Services was served with the original complaint and even answered it! Thus, the fact that it participated in the lawsuit before filing the motion to dismiss belied any claim it had of lack of knowledge or prejudice. Therefore, the appellate court reversed the trial judge and sent the case back to determined on the merits.

As a result of Applebee’s and its lawyers trying to use legal technicalities, Ms. Mitchell’s case was unnecessarily delayed due to no fault of her own. It is obvious that Applebee’s Services was playing games with the court system and trying to get the case dismissed so that it didn’t have to put the case in front of a jury of Ms. Mitchell’s peers. However, this case is an example of what goes on throughout the court system in Florida. Big businesses and insurance companies pay teams of lawyers a lot of money to come up with defenses to avoid having to pay out claims. This case example should not be a surprise.

If you or your loved one has been injured in a slip and fall accident and have questions about your legal rights, please contact us for a free consultation. We handle a variety of personal injury cases, including slip and falls at restaurants as in the case discussed above. We have seen that most slip and fall cases are due to water or liquids being left on the floor causing a dangerous condition. These types of falls can cause broken bones, injuries to the knees, wrists, back and neck. We have a proven track record of success in handling these types of cases and would be happy to discuss your situation.