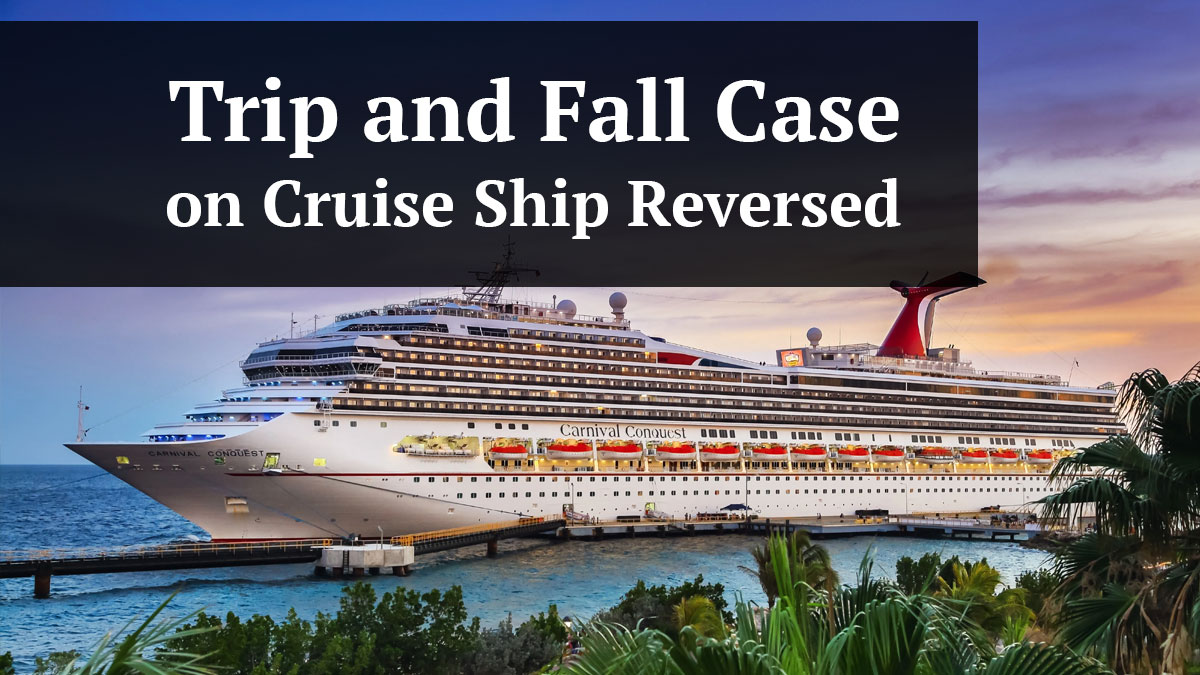 In a major win for people injured after a trip and fall accident, a Federal appellate court just reversed the dismissal of a case by a Southern Florida court. The court determined that there was sufficient evidence of negligence by the cruise ship under federal maritime law and sent the matter back to the lower court for a trial on the merits. This victory is a significant win and sets a tone that cases where people have been injured due to unsafe conditions at businesses (including cruise ships) should not be dismissed by judges. These cases should be judged by juries without judicial intervention or second guessing. Injured Floridians now have grounds to use this case law in their favor in other cases.

Trip and fall accidents fall into the same legal standard as slip and fall accidents. The terms are used interchangeably. The only difference between most trip and fall claims and the case at hand is that this accident occurred on a cruise ship at sea. Therefore, federal maritime law applied. That meant that the lawsuit had to be filed in federal court. Federal district court judges are notorious for being unsympathetic to the “little guys.” Fortunately, in this case, the 11th Circuit Court of Appeals in Atlanta sent a message that these types of trip and fall cases deserve their day in court.

At St. Petersburg Personal Injury Attorneys McQuaid & Douglas, we routinely monitor all recent case decisions that may affect our own trip and fall or slip and fall claims. Because these types of cases are met with resistance from insurance companies and the courts, the lawyers for the injured must be aware of the law. We specialize in both trip and fall and slip and fall claims in Florida. And, because many of our clients travel on cruises out of local ports, we often handle these types of claims. With the cruise industry temporarily shut down due to the global pandemic as of the date of this article, there is no telling when cruise ships will be running again. But, the legal standard of the following case can be applied in any type of trip and fall at a business. The case provides a detailed analysis of the law and the duty that every business has to its guests.

Facts of the Case

In Carroll v. Carnival Corporation d/b/a Carnival Cruise Lines, 11th Circuit Case No. 17-13602 decided on April 15, 2020 and appealed from the US District Court for the Southern District of Florida (No. 1:16-cv-20829-JEM), Carroll and her husband were passengers on the Carnival Pride in March of 2015. On the first day of the cruise, Carroll and her husband were walking toward a restaurant on a curved walkway. On one end was the ship’s railing and the other were lounge chairs set in a semicircle. The couple walked side by side at first, but as the path narrowed, Carroll’s husband walked in front. Because her view was then blocked and the path narrowed, her foot clipped one of the lounge chairs, she tripped, fell, and was injured. Carroll filed suit against Carnival for negligence for failure to maintain a safe walkway and failing to warn her of the condition.

During the course of Carroll’s trip and fall lawsuit many discovery depositions were taken. Depositions are sworn statements that each lawyer takes from witnesses. Mrs. Carroll and her husband both provided depositions. They testified that she was forced to walk behind her husband because the pathway narrowed. They both testified that some of the chairs were in the flat position. Her view was blocked by her husband’s profile, although she stated she could have seen the leg of the lounge chair had she looked down. Mr. Carroll testified that 3 or 4 of the chairs were out of position and pulled from the glass wall several feet. He stated that the area was like an obstacle course and that the width of the walkway was about 20 inches at the point that Mrs. Carroll tripped and fell.

One of Carnival’s employees testified that if the lounge chairs were arranged in the flat position rather than upright, they would protrude further into the walkway and make the space that much narrower to walk through. As a result, one of Carnival’s pool deck supervisors said the policy was that the chairs were supposed to be arranged upright and that it was Carnival’s policy to make sure that the charis did not protrude or block the walkway. However, another pool deck supervisor contradicted that testimony and said that the chairs could be left flat or upright. A security officer also stated that part of her duties were to patrol that area of the ship and make sure that chairs did not protrude into the walkway for safety reasons. Carroll also hired an expert who stated that the width of the walkway was below industry standards if the chairs were left in the flat position.

Carnival filed a motion for summary judgment asking the District Court Judge to not allow the case to proceed any further. Carnival argued that the lounge chairs did not create a dangerous condition, and even if they did, it had no duty to warn Carroll because the area was open and obvious and they lacked notice of the hazard. The District Court granted the motion. It stated that the condition was open and obvious and Carnival lacked notice of the condition. Carroll appealed the decision to the 11th Circuit Court of Appeals.

The case was briefed by both parties and there was an oral argument. The appellate court went through an analysis of the law. It stated that the matter was correctly governed by federal maritime law because Carroll was injured while at sea. It stated that Carroll had to be able to prove that Carnival had a duty to protect her from injury, it breached that duty, the breach caused her injury, and she suffered actual harm. As far as the duty element, Carnival had to have had actual or constructive notice of the dangerous condition.

As to Carroll’s claim that Carnival failed to warn her of the dangerous condition, it stated that there was evidence in the record that because Mrs. Carroll was forced to walk behind her husband due to the narrow walkway, it was reasonable that she would not have seen the lounge chair leg. Thus, it stated that the District Court should not have decided that the condition was open and obvious.

As to Carroll’s claim that Carnival was not on notice of the dangerous condition, the appellate court stated that multiple employees testified that it was known that the chairs in that area were supposed to be maintained and not supposed to be in the lay flat position. As a result, the appellate court stated that Carnival was on notice of a potentially dangerous condition and disagreed with the District Court’s decision.

The Carroll case took a detailed look at federal maritime law when it comes to trip and fall cases. It was a sophisticated analysis over a very simple accident. The amount of time and money that Carroll and her lawyers must have spent to simply get an order to allow her to get the case to a jury must be staggering. This is an example about how big businesses fight these cases tooth and nail. It is also an example about how some judges do not regularly rule in favor of injured people. However, Carroll’s lawyers did an excellent job getting to this point in the case and hopefully, Carnival will do the right thing and compensate her for her damages.

At St. Petersburg Personal Injury Attorneys McQuaid & Douglas, we specialize in all trip and fall and slip and fall claims. We understand how these injuries are unexpected and can result in massive losses, broken bones, and surgery. They can wreak havoc on people and their families. If you or a loved one has been seriously injured at a business and would like to discuss a possible claim, please contact us for a free consultation.