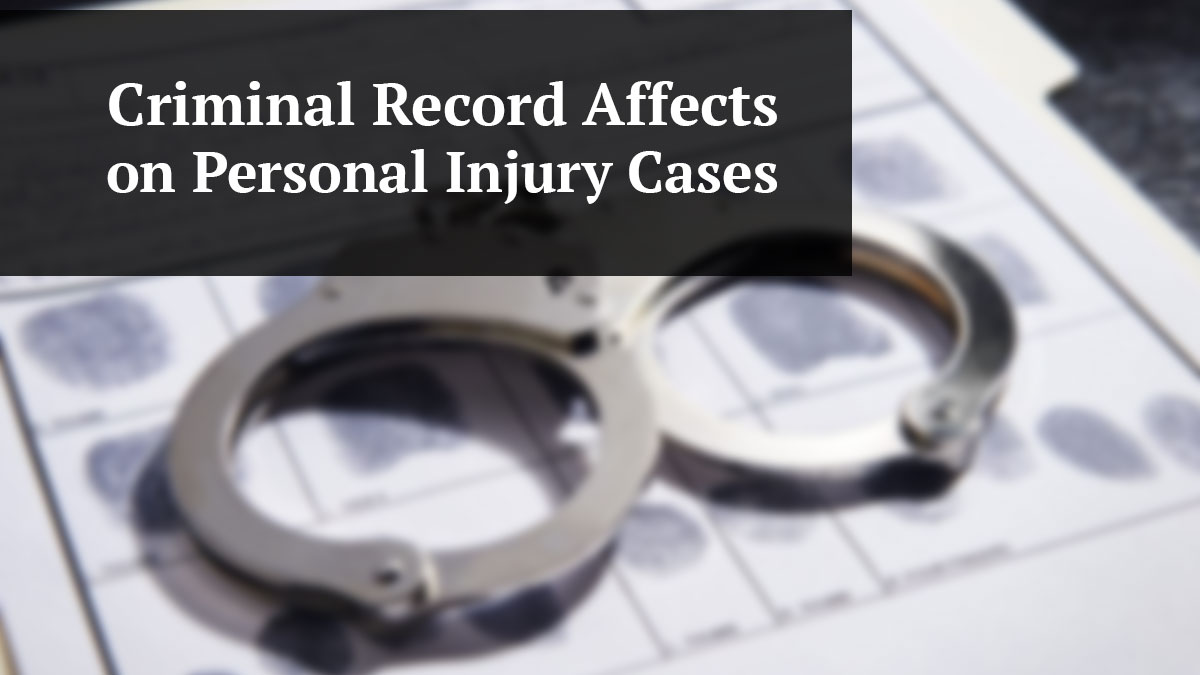 Don’t be ashamed or embarrassed if you have some hiccups in your past. According to a study by The Sentencing Project, between 70 and 100 million Americans have some type of criminal record. That amounts to about one third of the entire country!

At St. Petersburg Personal Injury Attorneys McQUaid & Douglas, we have represented many people with past or present criminal and traffic priors. In fact, I, Sean McQuaid, devote a large portion of my law practice to defending people charged with crimes. I almost exclusively handle Pinellas County cases because that allows me to be familiar with the prosecutors and the judges that my clients appear before. So, I am an expert at understanding priors based on my criminal defense practice.

Also because I have a large criminal and traffic defense client base, many of those same clients inevitably get injured in accidents due to no fault of their own. Then, they become my personal injury clients. In the personal injury world, priors can have an effect on what the insurance company will pay and how I need to handle a case. This article is devoted to explaining what happens in Pinellas County if you have an injury case and some prior criminal or traffic history.

There are legal guidelines in Florida over the ability to use criminal convictions found in Florida Statute § 90.610. This statute allows anyone, whether it is a witness, the plaintiff or the defendant to be impeached if they have a felony conviction or misdemeanor crime of dishonesty or false statement. A felony conviction is pretty easy to determine, but what are misdemeanors involving dishonesty or false statement? In my experience, those are usually worthless check charges, petit theft, or shoplifting charges. It should be noted that juvenile priors cannot be used. Fl. Stat. 90.610(1)(b).

But, there are limitations on what can be used against you. The statute goes on to say that “evidence of any such conviction is inadmissible in a civil trial if it is so remote in time as to have no bearing on the present character of the witness.” Fl. Stat. 90.610(1)(a). But, what does that mean? It means that the judge needs to go through a balancing test in every instance to determine if the conviction can be presented to a jury. In the federal system, there is a bright line rule of 10 years. Florida courts use this as a guide, but they are not bound by it. Some judges use 10 years from the date of conviction and some judges use 10 years from the date you completed your sentence. So, if you went to prison or were on probation and just completed your sentence, some tougher judges will use the longer time frame. It honestly just depends on which judge you get. But, there are certain crimes that will always be introduced regardless of the length of time. Perjury is a prime example. The courts will always allow someone to be impeached if they have a perjury conviction, so that fact needs to be considered in any case. But, most convictions that really don’t have any impact on credibility are excluded if they are over 10 years old. For example, an old drug possession charge really doesn’t have much impact on whether you got injured in a personal injury case. But, a grand theft charge or fraud charge might be tougher to keep out even if it is older.

What About Traffic Charges?

Almost everyone has some type of traffic citation on their “record.” Civil traffic citations or traffic tickets are never admissible. That includes speeding tickets, careless driving tickets, red light tickets, etc. Also, criminal traffic charges are not admissible. That means all misdemeanor DUIs, driving on suspended license charges (DWLSR), or even reckless driving charges. But, if you had a felony traffic charge and got convicted, that is admissible. Again, this applies to prior charges only. If you were charged in connection with the accident for DUI or reckless driving, that is a different story. I actually handled a case for a client who was charged with DUI in a car accident case. It was an odd case and handled poorly by law enforcement. As he was driving, a woman pulled out in front of him and he t-boned her. She was cited for causing the accident with careless driving. When the police investigated, he admitted to drinking a couple of beers and they arrested him for DUI. His blood alcohol level was .03 and his urine was clean. He should have never been arrested, but the officer did not like my client. The case was dropped by prosecutors within a month. It was completely dismissed. He had legitimate, non-debatable injuries to his spine. When his prior attorney sent off the demand to the insurance company for the lady, they offered only peanuts. When I took over the case, I filed a lawsuit and the insurance lawyer admitted that the adjuster was not going to pay the full amount of any claim because he was charged with DUI. When I provided proof that it had been dismissed, they finally paid up. But, to this day, I still believe that his claim was worth more and that he was penalized for the wrongful arrest for DUI. But, in his case, it was not worth continuing to pursue the case over a difference of a few thousand dollars. The truth was that my client had been drinking and that could have been used to argue that his reaction time was slower as a result. The insurance company could have successfully argued to a jury that my client was partially to blame. So, we did the best that we could.

How Does a Prior Criminal Record Actually Come Out in Court?

This is actually a strategic issue. On cross examination, the other lawyer is able to ask you (or any witness), “how many felony convictions do you have?” You are only required to answer with the number of convictions. But, if you and your lawyer want to “open the door” to more information about the conviction, that is permitted. For example, you have a conviction for possession of a controlled substance. Your lawyer tried to keep the other side from bringing out the conviction, but the judge said it was allowed. Say the police found a pill in your car and you got convicted of the offense. You might want to bring up the facts and tell the jury that you were charged with one pill from years ago and you got probation. Again, this is only an example, but one that I could see happening. So, there are strategic decisions that can be made in every case to soften the blow of the conviction.

Does a Prior Record Actually Affect the Value of My Injury Case?

You can count on every insurance company running a full background check on you. And, their background checks are the best that money can buy. You would be amazed at the kind of dirt that they are able to drag up on people. This information is then provided to an insurance adjuster. These insurance adjusters are just regular working people who must decide on how much to pay you to resolve the claim. The unfortunate reality is that negative information will affect the value of your claim. It won’t destroy the claim, but it does hurt the value. This general rule applies to all negative information including a bad driving record, criminal charges that were dismissed or adjudication withheld, or anything else they can find. It is difficult to say how much negative history devalues your claim, but it is a factor that you and your lawyer must understand occurs.

If you’ve been in trouble and hired a criminal defense attorney, you likely would have had to pay a flat fee or retainer. That usually comes with the caveat that an additional retainer is owed if the case goes to trial. But in a personal injury case, the fees are charged on a contingency. That means that the lawyer charges a percentage out of the money that is recovered for you. In a personal injury case, you never have to pay any money unless you win the case. This arrangement is unique and makes people who do not have money to put down to pay a lawyer able to hire the best personal injury lawyers around.

Just because you have a prior record, it doesn’t mean that your case is not worth pursuing. And, there is no reason to get discouraged. It is just a factor that you need to discuss with your lawyer in advance and prepare a strategy. The insurance company will find out about these problems and try to gain leverage against you. So, always disclose any negative history with your personal injury attorney and let him or her deal with it.

I have represented countless people who have had wonderful settlements and have very valuable cases even with a criminal record. If you have a prior record, you really need to hire someone who knows the system and how to deal with them. Insurance adjusters and most defense attorneys may have little to no experience in interpreting criminal charges, so an experienced lawyer on your side can really help to straighten out any concerns the other side may have. If you have any questions about a personal injury claim, please contact me for a free consultation.