The topic of this video is what are requests for admissions in a personal injury case. So similar to other types of discovery of requests for admission is simply a document that is sent to your lawyer asking you to admit or deny certain things. So it's done in every type of civil case. It doesn't matter. It's not specifically related to personal injury. And actually not every insurance defense lawyer sends out requests for admissions, but some do. So basically after you filed a lawsuit, a defense lawyer may send you what is called a request for admissions and your lawyer will normally handle that on your behalf. Sometimes we'll ask you some, some questions about it, but it's usually a pretty straightforward, pretty easy question. And the answer, uh, I don't feel that they're very important in cases. Um, the goal of it is to, honestly, from an insurance defense perspective, get you to deny something that later at trial you admit to or vice versa.

Right? They're trying to, they're trying to set a trap for you. Right. But, um, because they could ask these questions at deposition, they could ask them at any other time. Like, why do you have to put it on a request for admission right at the outset? The only reason to do that would be to try to lock you into an answer early on. But other than that, requests for admissions. What I did was I just pulled a sample requests for admissions that an insurance defense lawyer sent me in another case. And I'll just read through the types of questions that they're asking a, it looks like, how many questions are there? 12 questions here. So this one, number one, uh, admit that the plaintiff received benefits from a collateral source. Number two, admit the plaintiff received benefits from a collateral source for lost wages. So the first one was medical bills.

So a number nine, this action is subject to Florida vehicle, no fault law number 10. Um, at the time and place of the incident, the defendant complied with the provisions and security requirements as set forth in the Florida statute. Number 11. Plaintiff is an insured person for pip. Number 12, pip benefits have been paid on behalf of the plaintiff in the amount of $10,000. Number 13 actually, medical payments have been paid in the amount of $5,000 and that they're entitled to an offset for the $5,000 so again, these are not the most complicated questions. Some of them really don't have a whole lot to do with the case, other than just a lock in answers that they already knew or that they could just simply ask the plaintiff at deposition. But again, requests for admission. At the end of the day, they're just simple written questions asking you to admit the NY or, or maybe your lawyer will object to them. They're not that complicated. So hopefully that answers the question as to what is a request for admissions in a personal injury case.
*The above has been transcribed by a third party service and has not been checked for accuracy

St Petersburg Personal Injury Attorneys McQuaid & Douglas are committed to helping their clients achieve the best possible outcome. If you or a loved one has suffered a personal injury due to someone else’s negligence, don’t hesitate, contact us today at (727) 381-2300. We are open 24/7 and you will be speaking with an attorney. 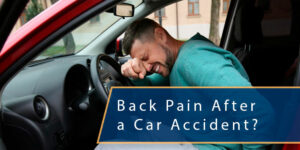 Is Back Pain After a Car Accident Normal?