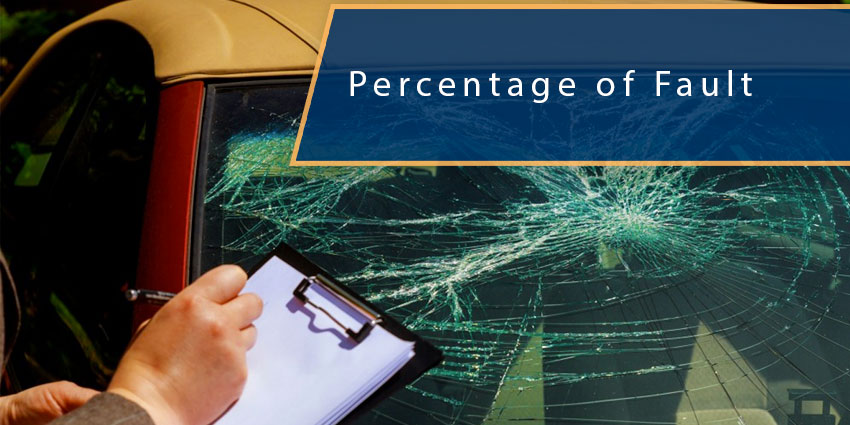 If you get rear-ended, or someone hits your parked car, it’s normal to assume they are at fault. However, sometimes car accident cases are not clear-cut or straightforward. While it may seem obvious that the other party is completely liable, sometimes insurance companies think otherwise. For example, consider a case where a speeding car hit you, but you were parked illegally. In that case, both parties are at fault. So what happens if the insurance company says it only accepts a percentage of fault?

If the accident was 100% the other party’s fault, you might be entitled to recover financial compensation for 100% of accident-related damages. Such damages usually include medical bills, lost wages, pain and suffering, and more. But if the other party or the insurance company alleges that you were partially at fault for the accident, you might be entitled to less compensation. The amount you are eligible to recover would depend on the percentage of fault you contributed. In Florida, this is the rule of “comparative fault.”

With proper legal representation, you can properly assess the scope of your damages and how much you can recover. The compensation you get from a personal injury claim will help you pick up the pieces and get your life back on track. But, if you don’t clearly understand the extent of your losses, you won’t be able to determine a fair value for your claim.

There are three different models of comparative negligence in the states. Each state has the right to choose its own laws.

Your level of negligence is measured in percentages. A judge or jury will reduce your financial award by the percentage of your negligence. So if you are 20% at fault after a jury awards you $100,000, your award would be reduced by 20%. Therefore, your award is $80,000.

Even if you were 99% at fault, you could still recover compensation for the percentage you were not. There is no cap on the negligence percentage.

Florida uses modified comparative negligence. This model also assigns a percentage of blame to each party. They also reduce the amount of your award by the percentage of fault. However, there is a cap on the acceptable level of negligence for the plaintiff. So, if your level of negligence is higher than 50% (or 51% in some states), you cannot collect any compensation. You could still seek compensation if you were 49% negligent or less.

This very strict model bars plaintiffs from collecting damages if they were even 1% at fault. If a jury finds you are even 1% at fault, you cannot seek compensation for your damages. Only four states follow pure contributory negligence (Alabama, Maryland, North Carolina, Virginia, and DC).

What if the Other Party’s Insurance Says I Was Partially at Fault?

If the other insurance company says you share fault in the accident, you might be partially liable for your injuries. However, they must meet a standard of proof to show you were actually at fault. So, the insurance company must prove the following:

For example, let’s say you got T-boned. The insurance company might accept 80% of the fault but say you were 20% at fault for not stopping in time. Insurance companies often use such tactics to avoid paying 100% damages to injury victims. For example, they might accuse you of speeding or following too closely, contributing to the accident. Whatever the case, they will use it if they can find any justification for your fault. As a result, they would owe you less compensation.

If the insurance company asserts that you were partially at fault, you need to seek strong legal counsel. That way, you can rebuttal their allegations and ask the right questions. In addition, your attorney can help you devise a winning strategy. For example, you may want to question what evidence they have, if any. Or if you have any countervailing evidence to challenge their allegations. It’s also important to ask how they calculated your percentage of fault. But, again, an experienced Florida personal injury attorney who has experience in dealing with these cases knows the right questions to ask.

The Law on Comparative Negligence in Florida

Instead, Florida’s comparative negligence will reduce the amount plaintiffs can recover. Their percentage of fault would decrease their compensation. So, if you are found to be 10% at fault, a judge or jury will reduce your compensation by 10%.

Insurance companies and adjusters often use comparative negligence as a way to reduce the value of claims. They offer reduced compensation depending on how much fault they assign you. Insurance adjusters know that a lot of people will not file a lawsuit. Sadly, that means they often undervalue claims. But, once you file a lawsuit, the value of your case will most likely increase.

Defendants seldom admit liability in lawsuits. Even when liability is clear and obvious, at0fault drivers often deny liability in the initial proceedings. This leads to unnecessary costs and delays. Moreover, they may even admit liability right before trial after denying it from the beginning.

Who got the ticket or traffic citation is inadmissible in your personal injury case. You are probably surprised to hear that. While I always like a citation to be issued to the other driver, there is always an independent investigation that could affect fault.

Most cases don’t go to trial. But if they do, a simple comment like “It wasn’t me who got the ticket” could result in a mistrial. That’s because law enforcement is not considered a witness to traffic crashes. Florida Statute 316.066(4) says that any statements in a crash report should be without prejudice to any individual and may not be used as evidence in the trial. Rather, their decisions are based on the statements from the involved parties. Therefore, they are protected by the traffic crash report privilege. In court, the jury is the decision-making body, not the police officers.

If you or a loved one has been injured in a car accident, take the appropriate steps to ensure you receive the compensation you deserve. Unfortunately, insurance companies don’t always play fair. But we will fight to protect your rights and ensure you aren’t bullied. We will work tirelessly to win you a fair compensation amount.