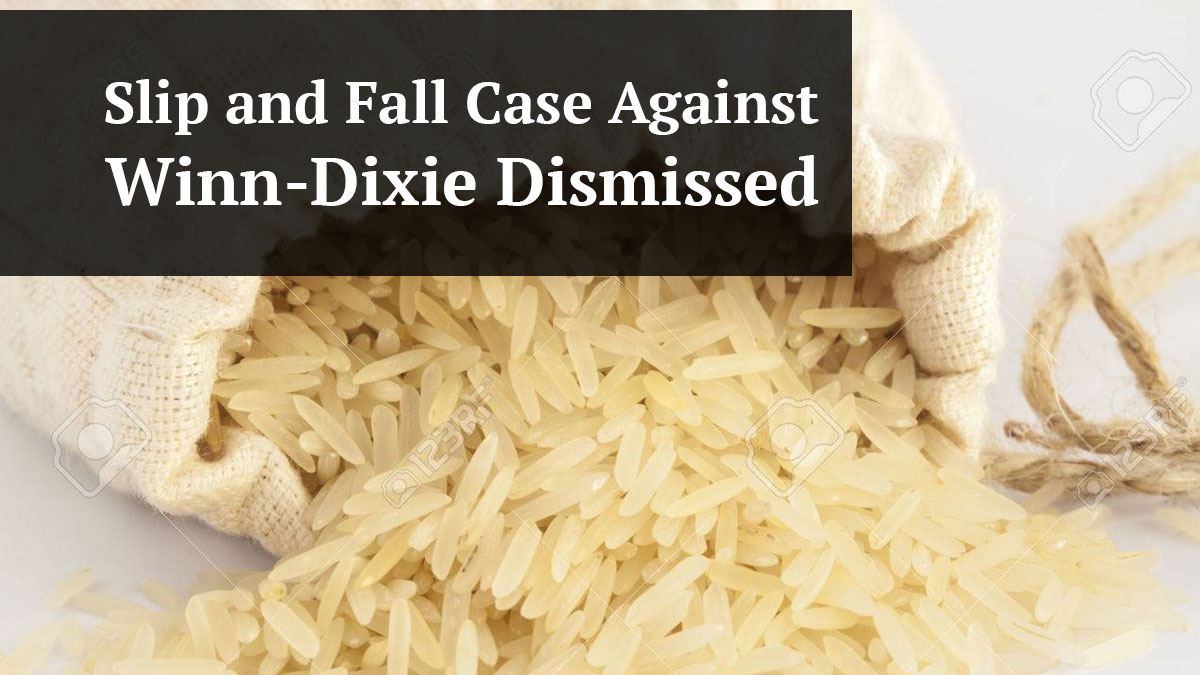 Slip and fall cases against supermarkets and grocery stores are quite common. By virtue of the fact that liquids and foods are often spilled, dangerous conditions frequently exist that inevitably lead to slip and falls. At St. Petersburg Personal Injury Attorneys McQuaid & Douglas, we specialize in slip and fall claims at grocery stores. We have handled countless claims against Winn-Dixie, Publix, Walmart, and Aldi.

We routinely monitor the results of slip and fall cases throughout Florida. In a recent case from Miami, the court dismissed a slip and fall lawsuit against Winn-Dixie. In my opinion, it appears that the injured person had a viable claim, but through the lack of cooperation of Winn-Dixie and their employees, the claim was thwarted. A full discussion of the case will follow below. However, the lack of cooperation by the employees of Winn-Dixie is no surprise to me. In my dealings with Winn-Dixie cases, their employees are routinely less cooperative, less friendly, and less eager to help their injured customers. I have had claims where they refused to investigate accidents and appeared disinterested or defensive when my clients asked for an incident report. Winn-Dixie’s customer service and overall care for the well-being of their customers is much different than what you will find at Publix or Aldi. In the slip and fall case from Miami, you will read how Winn-Dixie was able to get a case dismissed through lack of cooperation and a little luck.

The Miami Slip and Fall Case

In Pena v. Bi-Lo Holdings, LLC, 3rd District Court of Appeals Case No. 3D19-0581 decided on March 4, 2020, there was a slip and fall accident at a Miami Winn-Dixie. While Ms. Pena was shopping, she slipped and fell on uncooked rice that was on the floor. She fell so hard that she hit her head and was taken by ambulance to the hospital. Her sister-in-law ran to her aid and took photos of the rice and of an employee sweeping up the rice. After the accident, Ms. Pena hired a slip and fall attorney and sent the store a request to preserve the video surveillance of the incident. The case was not able to be settled, so Ms. Pena filed a lawsuit against Winn-Dixie claiming that they were negligent by not properly maintaining the store in a safe condition or warning her that a dangerous condition existed.

During the lawsuit, discovery was taken by both sides to learn more information. During this phase, it was discovered that the closed-circuit video recording system at the store failed to capture the area of the incident. Further, Winn-Dixie did not maintain the bag of rice. Lastly, despite having a picture of the leg of the employee who cleaned up the rice, the Winn-Dixie manager claimed to not be able to identify the person. Thus, due to the non-cooperation of Winn-Dixie and the inability to learn how long the rice had been on the floor, Winn-Dixie claimed it should not be held responsible. It filed a motion for summary judgment with the trial judge asking to dismiss the case on the grounds that rice was still white, not faded due to time and there was no indication that it had been on the floor long enough to give them notice of the dangerous condition. Ms. Pena countered the request to dismiss her case by claiming Winn-Dixie thwarted her ability to show they were on notice by improper video surveillance, failing to maintain inspection logs, failing to maintain the rice, and failing to identify the employee. Ms. Pena asked the judge to penalize Winn-Dixie by drawing what is called an adverse inference against them. The trial court disagreed with Ms. Pena. It failed to determine an adverse inference and agreed with Winn-Dixie that there was no evidence of notice. The trial judge effectively dismissed the case. Ms. Pena filed this appeal.

The Third District Court of Appeal reviewed the briefs and heard arguments of counsel. The main issue on appeal was whether an adverse inference should have been found against Winn-Dixie for their various failures to maintain the evidence of the slip and fall on the rice. The appellate court went through each of the issues. It stated that Winn-Dixie was obligated to maintain its video once it received notice of the incident from Ms. Pena’s lawyers. And, it said that they did since they turned over all of the video. The court stated Winn-Dixie could not be sanctioned for failing to create evidence, only for failing to preserve it. Thus, it found that this argument by Ms. Pena’s lawyer was invalid. As to the argument about Winn-Dixie not keeping inspection logs, it relied on the same premise. If the logs were not kept in the normal course of business, then there was no obligation to create them for purposes of this case. As far as the failure to keep the bag of rice, it stated that the witnesses and the pictures taken at the scene were all able to describe the bag, thus any value associated with it being kept was just speculative. As a result, it found this argument by Ms. Pena’s lawyer to be invalid. Finally, as to the argument that Winn-Dixie hampered their ability to find the store employee who cleaned up the rice, the court said that the store manager was asked to identify the employee and could not. It stated that the photo of the employee only depicted a lower leg and foot, thus there was no evidence of nefarious intent by the store manager when she said she didn’t know who that was. Thus, the court rejected this argument by Ms. Pena’s lawyer. Therefore, the court found that there was insufficient evidence to charge Winn-Dixie with notice of the dangerous condition of the spilled rice and agreed with the trial judge that the case must be dismissed.

This case against Winn-Dixie should never have ended with it being dismissed. I can understand if a jury said that Winn-Dixie was not at fault or perhaps not fully at-fault, but never should it have been dismissed. I agree with Ms. Pena’s attorneys that Winn-Dixie thwarted their ability to establish the case. The biggest problem that I had was the failure to identify the employee that was in the pictures sweeping up the rice. How that employee was not able to be identified from other video angles or from payroll records is beyond me. This is perhaps the most troubling part of the case in my opinion.

This case also does not set a good example for other grocery stores. If Winn-Dixie was not punished for having video that didn’t cover the whole store, didn’t maintain inspection logs, and refused to identify an employee, there is no motivation for any other store to take those steps. Thus, the case creates a horrible precedent for customers who are injured and cannot prove their claim because of potential obstruction or apathy.

If you have been injured in a slip and fall at a grocery store or any other business and want to know your rights, please contact St. Petersburg Personal Injury Attorneys McQuaid & Douglas for a free consultation. We are up to date with all of the case law trends of personal injury law and should be able to quickly diagnose the viability of your claim.